I still use Windows Update, but only once per year.

I have just had the most trouble-free computing year that I can remember. I have four Windows XP computers, two Macintoshes, and a FreeBSD server. And I like to tinker. But tinkering causes problems, especially in Windows with its dreadful “registry” system that makes completely uninstalling programs excruciatingly difficult. To minimize the excruciating headaches that I got from fixing Windows problems, I did the following:

I first wrote about the spare computer for testing in March 2006:

Keep a spare computer for emergencies. I enjoy installing, testing, and uninstalling software. This works fine on Linux and Mac OS X machines, but on Windows XP machines, the registry will invariably get so messed up that certain programs will no longer run. In the latest instance of this problem, the USPTO’s software that I use ceased working due to registry issues. The only solution was to reinstall Windows, which I opted not to do. The easier solution was to replace that computer (it was just over 3 years old) with two new Dell computers. I keep one as a development machine, the other as a production machine. I log all changes to each computer. If you are sure that you can keep your Windows machine from getting corrupted, then don’t bother keeping a spare one around.

The changelog idea is nothing new. It is good programming practice to note changes to files in the headers of the files (and/or in README files), and I’ve been doing this for years for my software. I’d just never done it for computers. Adding a changelog file for each computer is a logical extension of these good programming practices – and an idea that I stole from my friend Art. Here’s a snippet from my changelog for this computer:

My Windows machines are all behind firewalls, are all patched through Service Pack 3 (SP3), never run Outlook, and rarely run Internet Explorer. Running Windows Update only once per year seems like a good idea to me. I know that when I let Windows update itself, I was constantly having problems (and having to reboot). The operating system is the foundation upon which the house of applications (and your business) sits. Messing with it too frequently is like pulling the bottom card out of a house of cards and hoping for the best.

Here’s a screen-shot from Belarc Advisor (a nifty piece of freeware that profiles the hardware and software on your PC) that shows my last Windows Update (over a year ago): 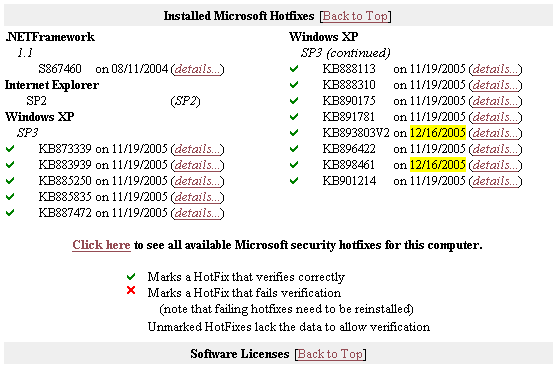 In the spirit of full disclosure, Belarc is/was a client of Clock Tower Law Group and is mentioned in this article.