Microsoft does doublespeak. Or how to fix blurry text. 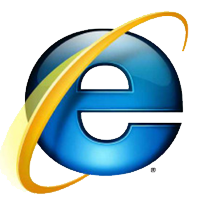 After I recently completed my annual Windows Update, which included updating to Internet Explorer 7 (IE7), I noticed something odd. My applications that used Internet Explorer as an embedded display engine (itself an odd choice – but I digress) no longer displayed crisp clear text. Instead, the text on the page was blurry, fuzzy, and out of focus. I thought that I needed glasses!

Application affected include Eudora 7, QuickBooks 2007, SharpReader 0.9.7, and the scanning software for my HP ScanJet 5550c scanner (HP Photo & Imaging Director). But the way IE7 broke Eudora was maddening. For composing new messages, Eudora uses its own viewer, and for viewing messages, it uses Internet Explorer (which is superior to Eudora’s built-in viewer). So messages I was writing were clear, messages I was receiving were not.

Here’s how to fix the problem. Turn off ClearType. Go to Internet Options (either from the IE7 menu or from the Windows Control Panel), Advanced tab, Multimedia section, and uncheck the “Always use ClearType for HTML” box. Restart IE7, restart Eudora, problem fixed. 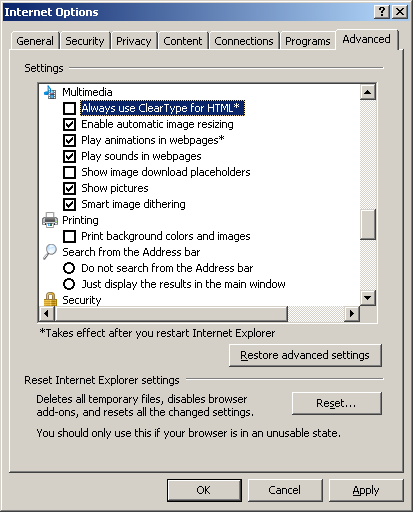 A related problem is that the HP ScanJet 5550c scanning software does not work with IE7. In this case, the solution was to roll that computer back to IE6, which was harder than it sounds. It’s best not to install IE7 as part of any automatic Windows Update. Install it separately so that you can remove it later if you need to.

I should also mention that I use flat-panel LCD monitors. Maybe ClearType actually makes type clear on LCD monitors.

The bottom line is that “ClearType” make the type less clear (least on my LCD monitors). It should be called FuzzyType. Bill Gates has got nothing on George Orwell.

One Reply to “* IE7 Fuzzy ClearType”