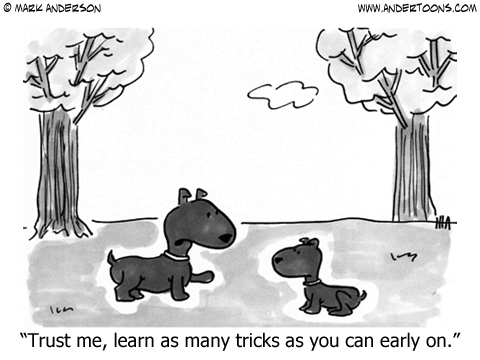 My name is Erik Heels, and this is my LawLawLawTM newsletter. Since 2001, LawLawLaw has documented trends in technology, law (mostly patents and trademarks), baseball (mostly Red Sox), and music (mostly rock). Today’s disclaimer du jour of the day: Unauthorized vehicles only. Thanks for reading!

Actually, in terms of the typical startup exit timetable (5-8 years), most of Clocktower Law’s clients are still puppies. But dogs of all ages can learn new tricks!

* Clocktower Law client Tamr Secures Investment From GE Ventures (2017-05-18)
“‘It is an honor to have GE Ventures as an investor, advisor, and partner in building our business,’ said Andy Palmer, co-founder and CEO of Tamr. ‘Like our other corporate investors, this relationship began with GE becoming a customer, and I’m delighted with this important step forward in our partnership together. Our goal at Tamr is to build an innovative and enduring company that is known for enabling our customers to transform and thrive. It would be hard to find a better role model for this than GE.'”
https://www.tamr.com/tamr-secures-investment-ge-ventures/

* Clocktower Law client Tamr Awarded Patent for Enterprise-Scale Data Unification System (2017-02-09)
“‘When my co-inventors and I began work at MIT CSAIL on what is now Tamr, we believed that traditional approaches to data integration had outlived their usefulness,’ said Mike Stonebraker, co-founder & CTO of Tamr. ‘Our goal was to build an end-to-end system for enterprise-scale data curation that leveraged modern machine learning techniques to radically reduce the time and cost of producing clean, unified data sets. Tamr’s growth has proven the commercial value of the many innovations in our software, and this patent now confirms the uniqueness of our invention.'”
https://www.tamr.com/tamr-awarded-patent-enterprise-scale-data-unification-system-2/

* Clocktower Law client Monetate moves headquarters to New York City (2017-01-10)
“The move will put us closer to our clients, many of whom are in the retail and fashion industries, and our marketing partner network (including Oracle, IBM, Weblinc, and Magento). Monetate now has offices in New York, Palo Alto, London, and the Philadelphia suburbs in Conshohocken, and has employees spread across the U.S. and Europe.”
http://www.monetate.com/blog/monetate-hq-moving-new-york/

* State Of 3D Software: Interview With [Clocktower Law client] Onshape CEO Jon Hirschtick (2016-12-19)
“If you look around the country, almost every community has created its own makerspace in an old mill or warehouse. This is an encouraging trend for America’s innovation economy. Many of the seeds for tomorrow’s startups are planted here. At the moment when a maker decides his or her product is ready to make the jump from a hobby to a business, Onshape presents a tremendous and unprecedented opportunity. The huge investment required for traditional CAD used to be a deal breaker. Now, with a full-cloud CAD subscription costing about the same as a utility bill ($100-$125/month versus $5,000+ upfront), professional design tools are far more accessible to emerging companies.”
https://www.forbes.com/sites/tjmccue/2016/12/19/state-of-3d-software-interview-with-onshape-ceo-jon-hirschtick/

* If you can’t explain something in simple terms, then you don’t understand it (2017-06-15)
Richard Feynman (1918-1988) is still teaching us about physics.
http://kottke.org/17/06/if-you-cant-explain-something-in-simple-terms-you-dont-understand-it

Clocktower Law names its computers for the (original and best) 64-color Crayola crayons. I correctly predicted that “Dandelion” would be the name “retired” by Crayola, but I’m still using the 1970s list of 64!

* Crayola Has Retired Dandelion – Here’s What Crayon Artists Suggest for Coping With the Loss (2017-04-03)
http://lifehacker.com/crayola-has-retired-dandelion-heres-what-crayon-artists-1793950521

* Crayola is ditching dandelion yellow from its range and replacing it with a new one (2017-03-31)
http://www.bbc.co.uk/newsbeat/article/39452039/crayola-is-ditching-dandelion-yellow-from-its-range-and-replacing-it-with-a-new-one

* Matal v. Tam: Only I Can Disparage You! (2017-06-19)
“The Supreme Court has affirmed that Trademark law’s restriction on registration of disparaging [trade]marks violates the free speech provision of the US Constitution.”
In related news, some vanity license plates, according to some states, are offensive.
https://patentlyo.com/patent/2017/06/matal-only-disparage.html

* Update on Global Trademark Harmonization (2017-06-13)
“Harmonization” is what broke US patent law (i.e. the AIA), so I fear trademark harmonization.
https://www.uspto.gov/blog/director/entry/update_on_global_trademark_harmonization

* Michelle Lee Resigns as PTO Director (2017-06-07)
As a result, we continue to recommend filing software patent applications as provisional patent applications, until the courts and USPTO come to their senses.
https://patentlyo.com/patent/2017/06/michelle-resigns-director.html

* Congress Creates a Copyright Office (2017-05-11)
Patent and copyright rights derive from the same clause in the Constitution, yet it is the Patent Office and Trademark Office that have been administrative siblings, while the Copyright Office has lived under the Library of Congress. Putting all three major flavors of IP under one roof just might make sense!
http://www.copyhype.com/2017/05/congress-creates-a-copyright-office/

The Red Sox are looking good in the dog days of summer! Here’s how the season has gone so far.

* Peter Gammons: 2017 ASG was fun and the way the event should be (2017-07-14)
“Baseball’s All Star Game decides nothing now; the World Series home field advantage probably should be decided by which league wins the interleague play series.”
http://www.gammonsdaily.com/peter-gammons-2017-asg-was-fun-and-the-way-the-event-should-be/

* Benintendi’s barrage: Rookie does it all (2017-07-05)
“Red Sox rookie left fielder Andrew Benintendi turned in perhaps the finest performance of his young career in an 11-4 blowout of the Rangers on Tuesday, going 5-for-5 with two homers, six RBIs, four runs scored and a double.”
http://m.redsox.mlb.com/news/article/240459818/andrew-benintendi-hits-2-homers-leaping-catch/

* Mookie enjoys monster day north of border (2017-07-02)
“Mookie Betts was a one-man wrecking crew for the Red Sox on Sunday afternoon, belting two homers and tying a career high with eight RBIs in the first seven innings against the Blue Jays.”
http://m.redsox.mlb.com/news/article/240081640/red-soxs-mookie-betts-goes-wild-against-jays/

* Red Sox rookie Brian Johnson blanks M’s in 3rd start (2017-05-27)
The feel-good game of the season (so far). Eck said it felt like a no-hitter. Brian Johnson has publicly struggled with depression, helping many in the process.
http://m.redsox.mlb.com/news/article/232801736/brian-johnson-goes-distance-in-red-sox-shutout/

* Someone Finally Made the Home Plate Slide of Our Dreams (2017-04-06)
Not a Sox game, but a great play!
“If you’re like me, you’ve spent countless years watching players round third toward a catcher blocking home plate wondering, ‘why doesn’t he just try to jump right over him?’ Well, Chris Coghlan of the Blue Jays finally made it a reality. Dude went full Superman on the catcher, catapulting over him and instantly putting everyone who’s tried the old ‘I’ll just run into him and hope he drops the ball’ maneuver to shame.”
http://www.survivinggrady.com/2017/04/someone-finally-made-the-home-plate-slide-of-our-dreams.html

* Why We PMC: The MCats Band Story (2017-07-17)
“On Sunday 08/06/17, my band will again be playing on the Pan-Mass Challenge party boat from Provincetown to Boston at the conclusion of the #PanMass2017 cancer fundraiser. Here is why we PMC. Cancer has touched the lives of many of us in the band.”
http://www.clocktowerlaw.com/3449.html

* history of the entire world, i guess (2017-05-11)
“You may remember Bill Wurtz from his video history of Japan, which I called ‘the most entertaining history of anything I have ever seen.’ I still stand by that, but his new video on the history of the Earth from before the Big Bang – ‘a long time ago, actually never, also now, nothing is nowhere’ – to the present day is just as good.”
http://kottke.org/17/05/history-of-the-entire-world-i-guess

* The Benefits of Writing Your Own Weekly, Monthly, and Annual Reviews (2017-02-21)
I’m including this article because I write self-assessment “digests” monthly for Clocktower Law and have encouraged my children to adopt this habit.
https://lifehacker.com/the-benefits-of-writing-your-own-weekly-monthly-and-a-1792563528