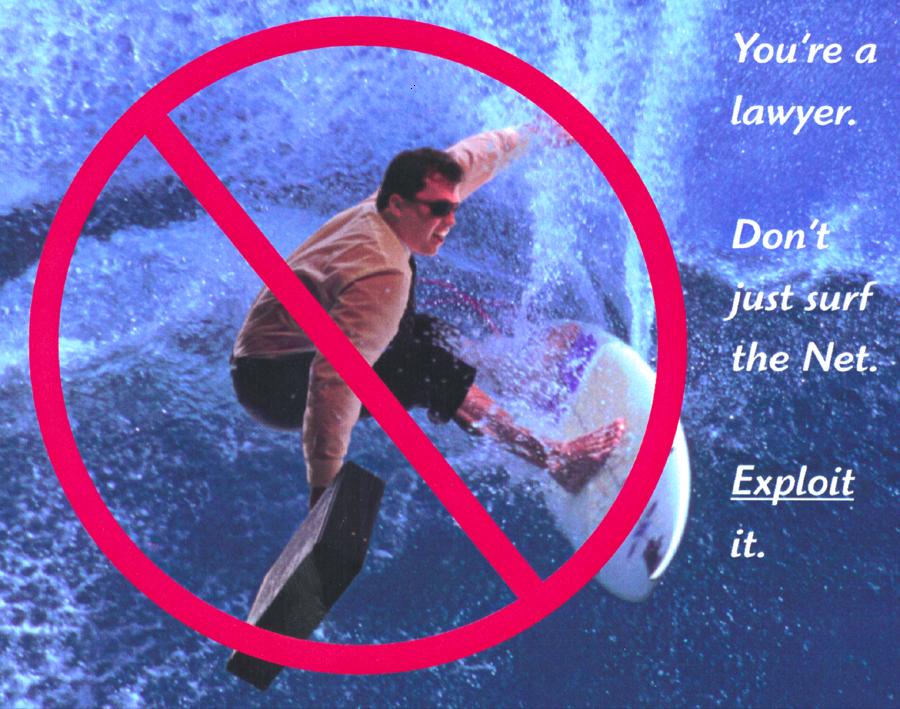 In February 1997, when I was working for Inherent.com, we had just received final advertising concepts from a high powered Bay Area advertising agency that we’d hired. The agency was recommended by someone on our board of directors, they had an impressive portfolio, and they charged a lot of money.

Problem was that their concept was awful. So awful that I fired them. At that time, Inherent.com provided (among other things) websites for law firms. The advertising agency actually proposed a picture of a lawyer in a suit on a surfboard. Surfing — Internet — get it!? Wow. It must have taken all of five minutes for the firm to come up with that idea. Leaving them lots of time to rest comfortably on their laurels and enjoy their two-martini lunch.

Before I fired them, I tried to rescue the ad by having them put a big red slashed circle across the surfing lawyer (think Ghostbusters) and write new copy. But I hated the concept so much that we ended up not running the ad at all.

Recently, Rick Klau suggested that entrepreneurs need to “make original mistakes” in order to succeed (http://www.rklau.com/tins/archives/2005/05/19/make_original_mistakes.php). I would add that business owners, in general, need to “make mistakes quickly.” In other words: do, learn, iterate, do. But don’t stop doing.

I recently made a mistake. I hired another high powered advertising agency, again based on a personal recommendation. The results? Pretty much the same as 1997. Awful ad concepts, high bills, laurels, and a very disappointed client. What have I learned from this? Perhaps that I should have written this entry back in 1997 (but then again, blogs didn’t exist then). Perhaps that high-powered ad agencies are overrated.

P.S. The first ad agency went out of business two months after I fired them.