The Yankees Begin To Comprehend What Is Happening To Them. 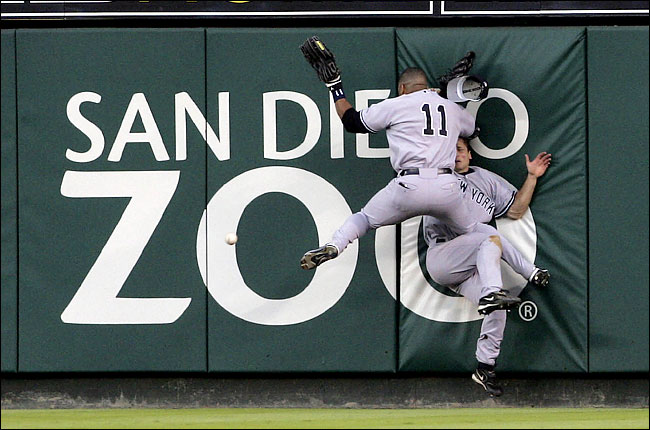 But, hypothetically, if there was a curse, and if the Red Sox reversed — not merely ended — the curse last year, then that means that the curse is now on the Yankees. How does such a curse manifest itself? By having key things go wrong for your team (or right for the other team) in key situations. Like (Cano) running into an out on botched hit-and-run. Or (Cano) getting called out for running out of the baseline on a dropped third strike, ending a rally for your team. Or having two outfielders (Crosby and Sheffield) botch a catchable fly ball that should be the third out of the inning, and instead having it drop for a “triple” (or a double three-base error, take your pick) that drives in two runs in what would turn out to be a two-run game.

What stands out for me about the Yankees in the 2005 ALDS is the sub-par performance of Posada, Matsui, and A-Rod. Here are the Yankees’ ALDS batting averages:

So, to repeat, I have never believed in and do not now believe in “the curse.” But if there is a curse, and if it is reversed, then long live the curse.