This first part of this post is about where I grew up. The second part is about LinkedIn.

I grew up in Cape Elizabeth, Maine. Cape high’s most famous graduate is marathoner Joan Benoit Samuelson. We moved to Cape Elizabeth (from Ashland, Massachusetts) in 1972, when I was six years old, just before the start of first grade. My parents wanted to raise us in a good neighborhood in a good town with good schools. Cape Elizabeth was a great place to grow up. There are two state parks and Fort Williams, which would be a state park in any other town. Maybe there is a law that limits towns to a maximum of two state parks.

For Williams is home to Portland Head Light, one of the most photographed light houses on the Atlantic coast. In 1978, the infamous Blizzard of ’78, the white wooden building that housed the fog horn was washed out to sea by a huge wave. That old horn had a low rich tone which we could hear on foggy nights. The horn was replaced by new higher pitched one and placed in a brick building. I never liked the sound of the “new” horn. Whenever I look at photos or paintings of Portland Head Light, I look for a white or red building closest to the ocean. White: pre-1978, red: post-1978. The following are two photos, one from circa 1900 the other from 1998. 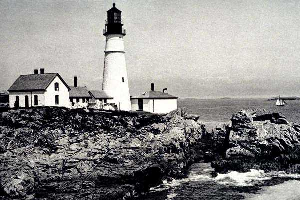 The third image is the splash screen for Netscape Communicator 4.04 from 1997. I have always maintained that the Netscape lighthouse is based on Portland Head Light. You be the judge. 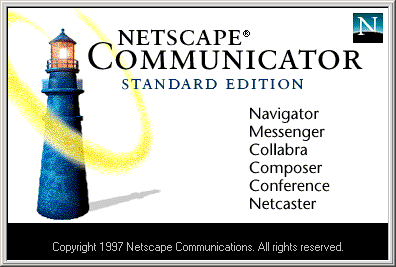 My friends and I used to find ways into the old bunkers at Fort Williams – before the bunkers were covered over to make way for parking lots and picnic tables. In the summer, we stocked the pond with fish. In the winter, we played hockey on the same pond. I remember seeing then Vice President Bush give a speech at the rededication of Fort Williams sometime in the early 1980s.

Cape Elizabeth was – and is – a wealthy town. But we weren’t among the rich. Growing up poor in a rich town gives you an interesting perspective on life. We benefited from a variety of government programs, including free school lunches and government cheese. I knew early on that the only way I was going to college was if I got good grades – and a full scholarship. I remember quite vividly the day that I got my acceptance letter from MIT, because my father was, at the time, unemployed. But he kept the faith and things worked out in the end. I got an Air Force ROTC scholarship, worked while I was in college, and spent four years in the Air Force to pay for college.

I feel quite lucky to have spent grades 1-12 in the same school system. I have vowed to provide the same opportunity to my children. We moved back to the Boston area (from Denver) just a few days before my oldest son started first grade. On his first day of first grade, we took him to Alexander’s (a local restaurant) for breakfast, because we has not yet unpacked our belongings.

LinkedIn is very useful for keeping in touch with people who move (or change jobs) more frequently that you can update your address book. Some people also search for references to themselves on the Internet. So if I can’t find them, maybe they can find me.

In this case, LinkedIn may prove useful in planning our 25th high school reunion, or our 30th reunion. I attended my 20th reunion a couple of years ago and really enjoyed it. It was nice to see people comfortable in their careers and I enjoyed catching up with old friends. My friends Peter Carroll and Tom Rich are both professors. Plus there were lawyers, doctors, sailors, artists, world travelers, and more.

So here are the approximately 143 people from the class of 1984 at Cape Elizabeth High School (CEHS). The list is not perfect. I transcribed it from my yearbook and might have made mistakes. Many of the women have married and change names. But maybe it will be useful to someone, for reunions or otherwise.