Nothing is easy, but clock radios should not be this user-hostile. 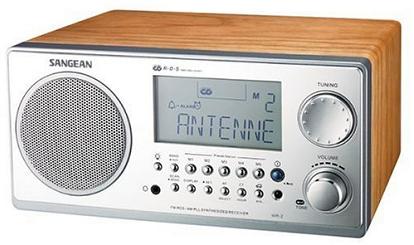 In July 2007, I gushed about the Tivoli table radio (pictured below). Amazon’s reviews were great, so I bought one for Christmas for my wife. We had only one clock radio in our bedroom, a cheap GE model that I purchased when I was a freshman in college (23+ years ago). Whoever got up first had to reset the alarm for the other. And since my wife works the 7-3 shift at our local hospital, she is almost always the first one up. 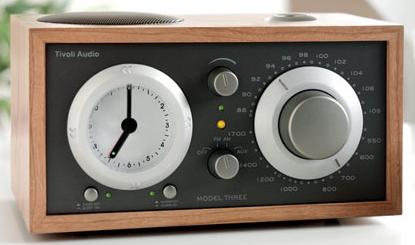 After concluding that the Tivoli Model Three was not for me due to the poor battery design, I searched for a substitute. Surely it would be easy to find a desktop clock radio that looks good and sounds good, right? Nothing is easy. I settled on the Sangean WR-2 (pictured above, top of page), which doesn’t look nearly as attractive as the Tivoli Model One, but which is supposed to have really good sound.

Guess what else the Sangean WR-2 has? The worst user interface for a clock radio ever! The owner’s manual is 24 pages long (24 pages!), of which three full pages (three full pages!) are instructions for how to use the clock radio. The instructions are bad, pathetic, and unreadable. The Sangean’s user-interface renders the clock feature of this supposed “clock radio” unusable. It takes seven steps to turn the alarm on, three steps to check if the alarm is on, and four steps to turn the alarm off!

Here are pages 10 and 11 (I am sparing you the “wake to buzzer alarm” page – who wants that?) from the owner’s manual (note my markups, an attempt to make sense of these horrible directions): 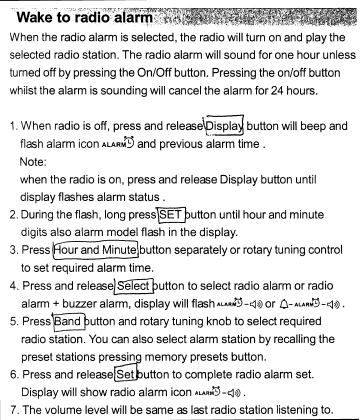 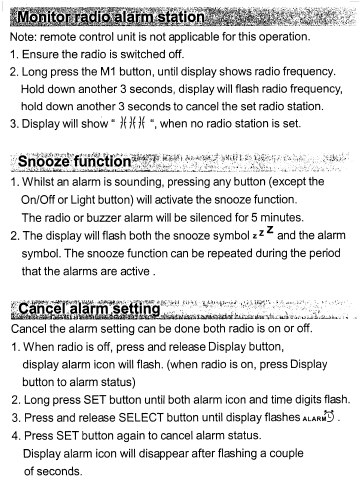 And here is the text of those pages with my pithy comments interspersed (in italics):

First of all, this should say “wake to RADIO.” Saying “radio alarm” is confusing.

The first sentence is promising. But the alarm only plays for an hour? How about playing until I turn it off? Say, for example, by moving an on/off SWITCH to “off”. Like on my 23-year-old GE clock radio. And if the alarm is canceled for 24 hours, does that mean it goes off the next day at the same time? Answer: yes. So beware of setting your alarm on Friday and planning on sleeping in on Saturday. Mr. Sangean is making the on-off switch on my ancient GE clock radio look better all the time.

OK, I’ve read this “sentence” a million times and have concluded that it is not, in fact, a sentence. And why the heck does it matter whether the radio is on or off? Sheesh!

2. During the flash, long press SET button until hour and minute digits also alarm model flash in the display.

Calgon, take me away!

OK, to be clear, there are TWO possible alarm settings: radio or buzzer. The first setting has FOUR icons, the second setting has FIVE icons. It’s like a Gary Larson Far Side cartoon where the human is in an alien bar and is trying to figure out which bathroom is which based on the incomprehensible graphics on the doors. I can tell you this much. When you are tired, you don’t want to be taking MATH TESTS in order to set your clock radio.

OK, so step six and I’m done, right? Only SIX steps to set the alarm. Right?

7. The volume level will be same as last radio station listening to.

WTF! A seventh step that is basically a do-over step if you were previously using the radio for – oh I don’t know – a RADIO? Let’s say you listen to the radio on a loud setting while you’re taking a shower but you want it on a soft setting for waking you up. Guess what? You have to start over!

Translation: here is a simple three-step process to figure out if your alarm is on or off.

Note: remote control unit is not applicable for this operation.

1. Ensure the radio is switched off.

Every time I tried to verify the radio station, I ended up holding down the stupid M1 button longer than pi seconds and ended up turning the alarm off.

OK, so the rocket scientists who designed this “clock radio” had THREE characters to choose to indicate that the alarm is OFF, and they chose three asterisks. Brilliant. Here’s a suggestion. Spell the word “OFF”!

Snooze is not a function, it is a necessity.

1. Whilst an alarm is sounding, pressing any button (except the On/Off or Light button) will activate the snooze function. The radio or buzzer will be silenced for 5 minutes.

So any button EXCEPT the ones you hit when you’re tired, is that it? And a 5-minute snooze? Are you kidding me? Everybody knows that a snooze is supposed to be NINE minutes long. No more, no less. But not 5. I can’t fall asleep again in 5 minutes after 41 years of being trained to snooze for nine minutes!

2. The display will flash both the snooze symbol ZZZ and the alarm symbol. The snooze function can be repeated during the period that the alarms are active.

Here’s a design hint for you. Make a separate button called SNOOZE. Make it really big and hard to miss. Make it the ONLY button on the TOP of the radio. You know, so that sleepy people can snooze without having to take a MATH TEST!

Translation: here is a simple four-step process to turn the alarm off.

Cancel the alarm setting can be done both radio is on or off.

Seriously, Mr. Sangean, are your parents brother and sister? Your secret is safe with me. And as for how to use your “clock radio” feature, that’s apparently YOUR secret.

The Sangean WR-2’s poorly designed clock radio makes my 23-year-old GE – with it’s simple ON-OFF-RADIO-BUZZER switch – look downright revolutionary. We ended up keeping the Sangean WR-2 because it is a decent sounding radio. But the so-called “clock radio” feature is simply unusable.