On 03/11/09, Google announced a new social networking feature: Google Reader Comments. Rather than trying to break this new feature, I decided to analyze what’s right and wrong about all of my favorite social networks.

I’ve highlighted in yellow the features that are most conspicuously absent from each service:

Google has entered the social networking space. But the problem with Google is that it was a search engine first, then a webmail platform, then a feed reader, then some other stuff. Google is not yet, unfortunately, a social networking platform that mere mortals can begin to comprehend.

Google’s various “Friend” user interfaces are colossally confusing and will continue to be a huge barrier to widespread acceptance of Google as a social networking platform.

Consider the user interfaces of the top social networking sites. Only Twitter’s UI renders properly on a 600×800 screen. All others require at least 1024×768. Simpler is better.

According to Google Reader, I have four friends. Four. According to Twitter, I have nearly 1000. The truth is somewhere in the middle. But it’s a heck of a lot more than four.

Here are some of Google’s major social networking flaws.

By clicking “Sharing settings” from the Google Reader home page, I can see that I’m sharing with 100 people but that only four are sharing with me. I betting that many don’t know how to share with me. But I do know this. It’s going to take more than four users for this feature to stick.

The home page of the main Google Friend connect site has no way to add friends. 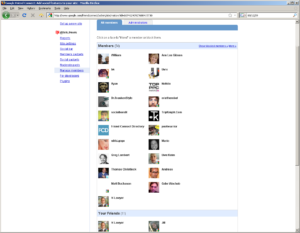 The “manage members” page on the Google Friend Connect site is not much better. Users are confusingly divided into “Members” and “Your Friends.” In the “Members” section, users’ names, emails, and bios are not shown, nor is it clear which (if any) of those “Members” are “Your Friends” – or what “Your Friends” means.

The Google Friend Connect interface can also be accessed via a widget on your blog, but this interface is also poor. New users have the option to “Join,” Sign in,” or “Join and connect with others!” Strunk And White rule 17: Omit needless words.

For blog publishers, the “Invite your friends” interface (which is accessible from the Google Friend Connect widget) is baffling. The Plaxo and Facebook icons are misleading: they allow you to post notes to Plaxo and Facebook but not import your connections from these social networks. I have one friend who is available to invite – Rick Klau – and I’m pretty sure he’s already my friend.

In short, Google’s various social networking user interfaces are very very confusing. Key word in that last sentence: various. Contrast the simplicity of Twitter’s “Follow” button with the complexity of Google’s offerings. That’s why I have two orders of magnitude more Twitter followers than Google friends.

I first heard about Google Reader Comments from @rklau, who predicted that I would break the new feature within three days. (I’m also a Google Trusted Tester but have never heard about any feature from that program.) In my defense, I wrote software in a previous life. And did software QA. So testing software to find its limits is in my blood.

It would make matters much easier, of course, if Google would simply publish documentation – including technical specs – for its new products. Otherwise my posse and I end up doing crazy things like spending weeks testing/breaking the Google Reader Shared Items Notes feature (whose input window is about 140 characters long) in order to determine that each Note actually can contain up to 64K of text.

Here’s a message I sent to one of my friends today:

After multiple attempts, my friend still does not appear in my Google Reader. But with one click of a button, we’re following each other in Twitter.

So I’m only complaining about all of this stuff because I care about it. Thanks for listening.