A top 10 moment at Fenway with my best friend. 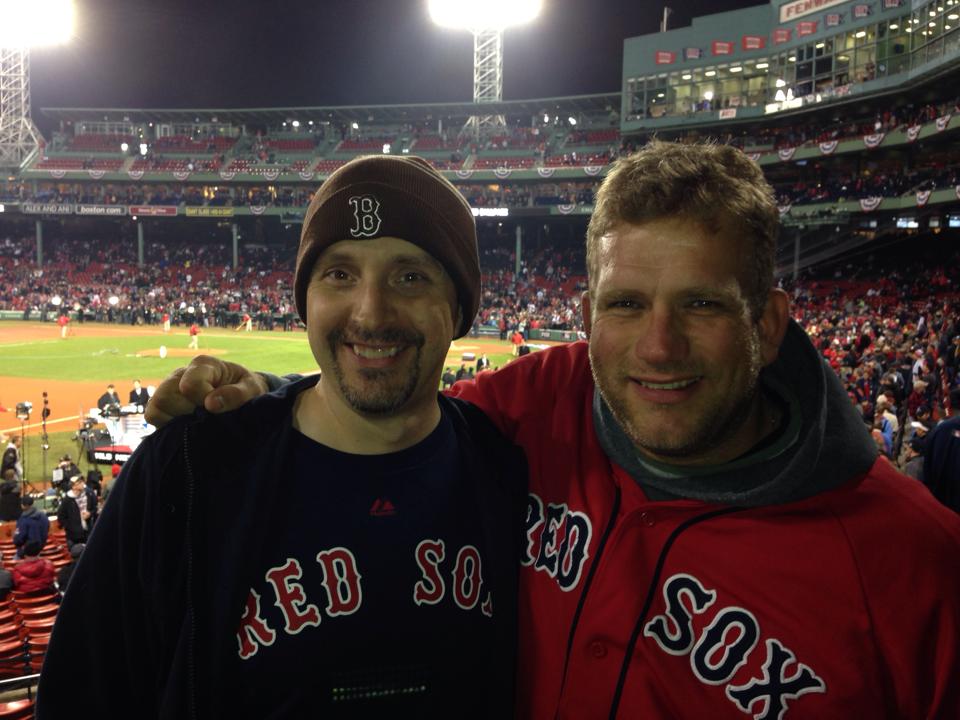 How excited am I that the Red Sox won the World Series last night? And that I got to attend Game 6 with my best friend, Joe? So excited that I slept in my (long-sleeve) Yaz t-shirt last night – and am wearing my (short-sleeve) Yaz t-shirt today! Yes, that’s right, I have two, (count ’em, two) Carl Yastrzemski t-shirts, which are normally reserved for gameday only. Who me, superstitions? Actually no. The truth is that after 2004, I don’t worry about anything anymore. But last night was a top 10 life moment, to be sure!

Many have wondered about my baseball obsession. Let me try to explain. I grew up (relatively) poor in Maine and my parents did not have the money to buy baseball equipment for Little League. I got my first baseball glove from a yard sale. In fact, I never played organized sports at all, except for intramural hockey at MIT (and for that, I use the word “organized” loosely). But growing up, I always played pickup sports: basketball, football, snow soccer, hockey (yes, pickup hockey), but mostly baseball. Two-on-two baseball, two-on-one baseball, three-on-three, whatever group we could gather. And if there were just two of us, we’d play catch or make up other baseball-related games.

From 1st to 8th grade, my partner in baseball crime was Joe (aka Jody) Wright, who lived a block away from me in Cape Elizabeth, Maine, and became my best friend at age 6. He’s been my best friend ever since, even though we attended separate high schools, colleges, and graduate schools. Joe was born about a year before me, married about a year before me, and divorced about a year before me. So I often tell him, “Man, don’t die!” I attended my only college football game (football is not huge, let’s say, at MIT) with Joe. And took a KC-135 flight with him while we were both AFROTC cadets, a flight for which his dad was the pilot!

Baseball was the perfect sport for me. Part physical, part mental, part drama. I was never particularly physically gifted as a child (struggling with childhood asthma) but always enjoyed all aspects of baseball. It started with playing catch with my dad in the street. Dad also took me to many Red Sox games, starting in 1975. Mom (the exact same age as Yaz) made me a Yaz costume for Halloween one year – and got me Yaz’s autograph! I would pour over the stats in the paper each day – and especially on Sunday. I collected baseball cards – and still have complete sets of Topps cards from 1976 and 1977.

So when 1975 happened, of course I expected the Red Sox to win, but win they did not. Then the best Red Sox team of my lifetime, the 1978 team, failed to make the playoffs. Then 1986, when I had a bottle of champagne ready to go during Game 6.

So when the Red Sox finally won the World Series in 2004, it was as if a lifetime’s worth of pressure had been released. My first call after the final out was to my dad. My second was to Jody. 2007 was icing on the cake.

Post-2007, I started going to games more regularly, thanks to the generosity of my MIT buddy John Reardon, whose family has had season tickets for some time. John and I attended ALCS Game 5 in 2008, which, in my opinion, was the greatest comeback in Red Sox postseason history!

Each year, I’d buy a few more games from John’s season ticket package. I bought a bunch in the 100th anniversary season of 2013, which, as you know, saw the Red Sox amass a 69-93 record.

And each year, the drama pulls me in. Ever since Seinfeld went off the air, I stopped watching episodic television. (Of course, that event also coincided with another top 10 life movement: the birth of my daughter!) But I love baseball for the drama. It’s not just a game, a series, or a homestand. It’s a story. I like the stories – and many of the storytellers (with the notable exception of CHB).

So when the 2013 story started to unfold, I was all in (as I am every year). About halfway through the year, I remember asking, “What’s the deal with the beards?” And that’s why I was unshaven for Game 6. For years, I’ve been trying to attend the game where the Red Sox clinch, and I finally managed to pull that one off this year, attending Game 79 with Rebecca, then my fiance, now my wife. (Did I mention I got married earlier this month? Another top 10 moment! Yes, it’s been a damn good October!)

The ALCS coincided with my honeymoon, so when John asked me about the World Series draw, I told him I wanted Game 6. I was calling Sox in 6, even after Game 3. And that’s how it played out!

Thanks, Rebecca! Thanks, John! Thanks, Jody! And thanks, Mom and Dad!