And why you should join the American Bar Association.

From 1997 to 2001, Rick Klau and I ran RedStreet as a part-time hobby/second job. Among other things, we published reviews of the best (and worst) law firm websites. Some of what we did is preserved in the books we wrote (Law Law Law in 1997, RedStreet’s Best Legal Websites in 2000) and in the Internet Archive <http://web.archive.org/*/www.redstreet.com/>, but some disappeared off the Internet when RedStreet closed its doors in 2001.

I’ve been thinking about RedStreet lately because of an upcoming nothing.but.net column that I’ve written for the American Bar Association (ABA). I have always considered myself a bit of an Internet evangelist, having first starting writing about law and the Internet in 1992, when I wrote the first edition of my book The Legal List. I even had the title “Verio Evangelist” when I worked for Verio. In the upcoming article (which will be published in the October 2006 issue of Law Practice magazine), I continue evangelizing for the proper use of the Internet. But I use the ABA itself as a case study and am very critical of the ABA in the article.

The article got me thinking about RedStreet, and in an effort to practice what I preach (without giving away too much), I’ve created a new RedStreet category <https://www.giantpeople.com/category/redstreet/> on this website so that some of what Rick and I did from 1997-2001 is available in one place. And I’m including this screen-shot of what the RedStreet website looked like on 09/01/99, right after Rick and I rolled out our latest website. The Internet Archive has other examples <http://web.archive.org/*/www.redstreet.com/>. I have a copy of the 09/01/99 RedStreet home page on my computer (as I tend to take snapshots of my websites at historic moments). I also reinstalled Netscape 4.75 to give the screen-shot an authentic retro 1990s look. 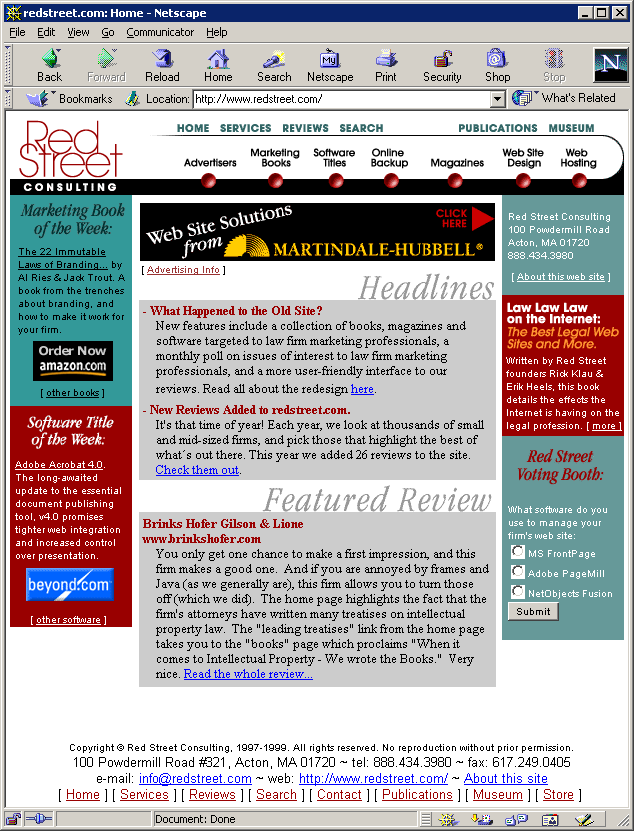 To the ABA’s credit, they have decided to run the article, which is likely to be controversial. Check out the ABA LPM website in 10/2006 – or better yet join the ABA – to read the details. The ABA is a large – and at times politically entrenched – organization, but it is willing to try new things, to take chances, to be introspective. Which is why I like the ABA, why I have been a member since 1992. Not many organizations – whether large or small – can say the same thing.