The USPTO’s web interface could use a UI makeover.

Over the weekend, the USPTO added a TDR link to all TARR pages, making 75% of each trademark application’s USPTO URLs now accessible from the static TARR page. Did that sentence make sense? If not, then the USPTO’s trademark websites need a makeover. Here’s a screenshot of the change: 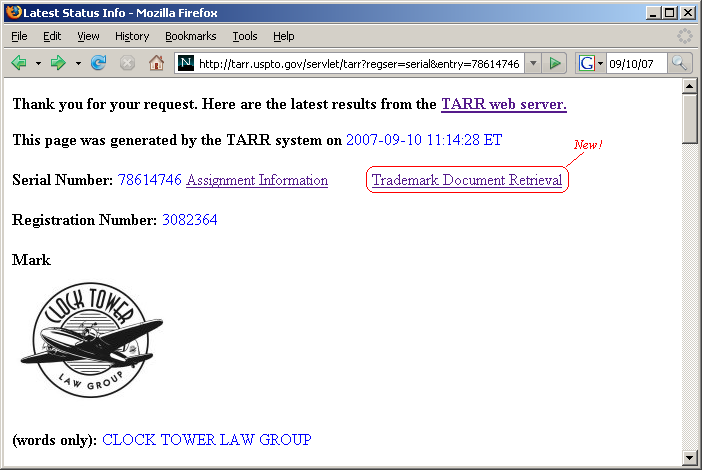 If the USPTO were to hire a user interface (UI) consultant to fix the USPTO’s various website, then the first thing that the consultant would notice is that there are (at least) four separate trademark websites:

The second thing that the consultant would notice is that there is no centralized search for these four sites. And in some cases, no full-text search at all.

The third thing that the consultant would notice is poor naming. (Which is ironic for the Trademark Office, don’t you think?) “TDR” is shorter than “Trademark Document Retrieval,” but nether name does a good job of describing what the system actually is. I’m imagining a Google-like UI with four simple tabs and better names like these:

The Trademark Office Should Hire Google

Much has been made about how Google indexed the patents database in December 2006. I don’t think I have to tell you that this is just the tip of the iceberg. Google should add the other patent websites to its index (such as the published patent applications database (APPFT)). And the patent bar should lobby for the USPTO to restore static patent URLs so that Google can index public patent application documents (which are now hidden from search engines with non-static URLs in the public PAIR system). Static URLs for patent documents were unceremoniously eliminated by the USPTO in May 2007. (I protested. Some other bloggers blogged. But the patent bar in general appeared not to care.)

I’m always amazed at how the USPTO’s public-facing web pages change with little or no public notice or input. This latest change is a baby step in the right direction, but it happened in a vacuum. Can you imagine if Google launched v17 (or whatever version they’re on) of their search user interface without telling anyone? That’s what the USPTO routinely does.

One Reply to “* USPTO Should Outsource Search To Google”