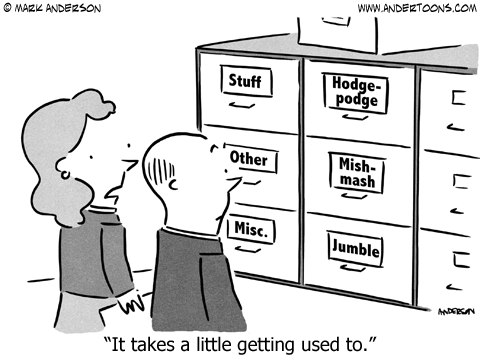 With that, I hereby clean out my current fodder file for the Year of Disruption (YoD) project. The above cartoon inspired by my own file cabinets, which my son, Ben, got a kick out of:

how to organize your life: pic.twitter.com/lQbIFSVuvG

One of my all-time favorite Mr. Boffo cartoons is one dated 2001-07-03 captioned “How The Mind Of The Dot Com Empire Builder Words” that shows two men sitting on a bench, one of whom points to a brick wall and says, “I know there’s 250,000 bricks in that wall … but how can I make money out of it?!” I would reproduce that comic here, except that it’s tricky to reprint cartoons legally, and this particular one is not in the Mr. Boffo archives.

A 2016 Harvard Business School study entitled “The Bright Side of Patents” makes some interesting conclusions:

The study found that approval of a startup’s first patent application increased its employment growth over the next five years by an average of 36 percent, and its sales growth by 51 percent. Approval of a patent application increased a startup’s probability of securing funding from VCs over the following three years, and patent grants more than doubled the probability that a startup is eventually listed on a stock exchange.

This study reminds me of a story I heard on NPR years ago that linked coffee drinking to an active sex life. Of course, many people concluded that they they should start drinking coffee. Whereas I thought the study had cause and effect confused (or perhaps confused correlation with causation) and reasoned that those with active sex lives drank more coffee because they were tired from being up late having sex.

So do patents really cause a company’s sales to increase? Or are companies with strong sales also good at prosecuting patents?

You can use 99designs to get an high quality logo produced quickly and inexpensively. In August 2016, used 99designs to create the YoD logo and thought I would have more than two sentences to say about it.

A November 2016 Entrepreneur article about networking repeats a marketing rule that I try to follow:

“One of the oldest concepts in marketing is the Rule of 7: that a prospective buyer needs to hear or read your message seven times before they buy it from you. The same applies to networking, which starts with showing up.”

My personal opinion is that this rule comes from learning foreign languages, namely that a word must be used by a student seven times before the student masters it. I have sometimes called this the “7 times rule.”

Question Du Jour Of The Day

What happens when your VC loses interest in – and ceases betting on – your startup? Just like with any economic policy, it is easy to favor one group at the expense of another. Have you been on the winning or losing end of a VC’s whims? Were they right or were they wrong? And who is keeping track?

OK, that’s more than one question. But still.

In Case You Missed It