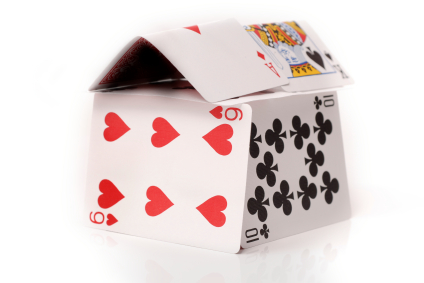 In 2009, my social networking fun was interrupted by Big Stuff: my wife and I decided to amicably divorce. We sold our big house in Acton, moved into two separate places, and are spending 2010 starting over.

Why do I blog about this? Three reasons.

First, to remind my readers (and myself) how precious life, friends, and family are. Life is a house of cards. It takes very little to disrupt what we consider to be normal. Death, disease, injury, unemployment, recession, war, or natural disaster can pull one card out and make the entire house collapse. I recall how Ernie The Attorney was happily blogging about law and technology when “massive change” came his New Orleans home when of Hurricane Katrina struck on 08/29/05. Massive change came to my life after I launched my law firm the week of 09/11 and it’s coming again now. But change is constant.

Second, to give some context to the changes coming to my social networking and my law firm in 2010.

In 2010, I will be blogging and Tweeting more regularly. I have refollowed the half of my Twitter followers who stuck with me. As an aside, I am using SocialOomph.com to automatically follow those who follow me and TwitSweeper to automatically purge my Twitter account of spam followers.

Speaking of purging, In 2010, I will strictly enforce my firm’s billing policies to weed out the minority of bad clients who are causing the majority of the firm’s headaches. Bad clients include those who don’t pay their bills on time, don’t pay finance charges when they are late, don’t provide referrals, and demand Champagne service on a beer budget. Life is short and I don’t have time for bad clients. This is good news for the majority of the firm’s clients, who will now receive more attention than we were previously able to provide.

Do you have the courage to fire your worst clients? I do. And I will. Nothing like Big Stuff to give you focus. Nothing personal, but I still have a business to run.

Third, because it is cathartic to write about this stuff. I write, blog, and Tweet primarily for myself. And if others enjoy it, that’s gravy. Having written for the ABA and others for years, I can appreciate the publish-or-perish nature of social networking. The reality is that when you stop, life will go on with or without you.

Big Stuff: life, death, marriage, divorce. Small stuff: everything else. Your definitions of big and small may vary, but one thing is clear. When Big Stuff happens, everything else seems like small stuff.

For me, 2009 was a year to forget: recession, divorce, and the Yankees winning the World Series. So, yeah, officially the Worst Year Ever. But in the midst of the chaos, I made a decision to get up, focus, and move on. This, too, shall pass. Thanks for your support.