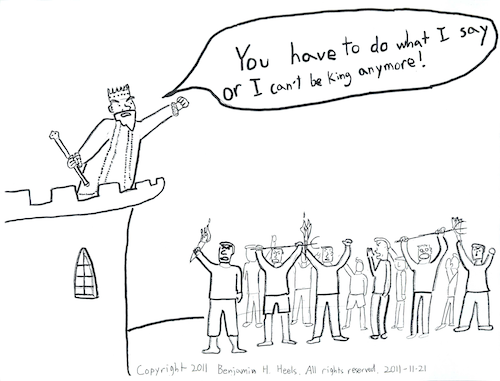 This article analyzes, chronologically, how the US got itself – and the world – into the current recession. I wrote this post primarily for me, because I don’t want to forget how we got into this mess. But if others like it, that’s gravy.

For the record, I have never belonged to any political party. As it says under “political views” on my Facebook profile, “I vote for the smartest candidate. It doesn’t always work out.”

President Barack Obama promised to end the two wars and the two windfalls (Bush tax cuts and TARP bailouts). To date, he has done none of this. In late 2010, Obama extended the Bush-era tax cuts. So they are Obama’s tax cuts now.

Some economists have declared that the late 2000s recession is over. But with US unemployment at 9%, it’s safe to say that the 2008-present recession is alive and well.

The #Occupy Movement: The Frogs Figured Out That The Water Was Boiling. To late? Or just in time. (That first sentence is in init caps because it was going to be the title of this post.) I recall what one Occupy Boston protester said about why he was protesting: “The Bush Administration may have caused the recession, but the Obama Administration didn’t do what it said it was going to do to end the recession (namely ending the wars, the Bush tax cuts, and the bailouts), and so we the Occupiers feel disenfranchised, with nowhere to turn but the streets.” Then, rather than arresting the politicians and bankers that caused the economic mess, the police started arresting the 99%! Crazy. Perhaps 10 years after 9/11, the terrorists have won.

There are many problems with the world, its economy, and its denizens.

People have a short attention span. Most have forgotten the Big Four and what preceded it (9/11).

People make decisions based on emotion, not on logic.

People take facts out of context.

So what happens? Politicians prey on emotions to get people to vote in certain ways.

The rich get richer, the poor get poorer.

It is sad, but it is true. Copyright law was long ago hijacked by Hollywood. In 2011, patent law was hijacked by big business.

50% of those in Congress are millionaires. Whose interests do you think they have in mind?

I don’t know who the next US president will be. But the formula for breaking the economy is well known:

Here’s how to fix the economy:

I’m pretty good at spotting trends. Do you see the trend here? The natives are getting restless. The US government must reform now.

Said the king to his protesting subjects, “You have to do what I say or I can’t be king anymore!”

44 Replies to “* Drawings, Charts, And Videos That Explain The Recession”