Down to their last 7 outs and trailing 7-0, the Boston Red Sox staged one of the most amazing comebacks in history. And I was there.

I was lucky to be at Fenway Park last night for the Sox thrilling 8-7 victory over the Rays. My friend John emailed me earlier in the day to invite me to the game because babysitting plans for his three young kids had fallen through, and his wife offered to stay home with the kids. Also a parent of three kids, I offered to babysit and have them go to the game as planned, but they insisted that I go. OK, twist my arm.

I’ve been to lots of Red Sox games in my life, but never a playoff game. And never a game like this one. I am reminded of the scene from the movie Fever Pitch where Jimmy Fallon’s character decides to skip one game and missed “the best game evah!”

So, thanks for the invite, John!

John and I frequently exchange emails at key points during the season. My claim to fame is a spectacularly accurate prediction that I made when the Sox were down 3-1 to the Cleveland Indians in the 2007 ALCS. What can I say? I’m an eternal optimist. That’s what it means to be a Red Sox fan.

Here’s some of the email that John and I exchanged before this game:

Erik: I’m not worried. Expecting a classic game. Probably a walk-off for the Sox. With Ellsbury the hero.

John: it is just comforting to know that:
a) a real fan will be using the seat
b) inclusive of (a) – said fan will not want to leave until the final out is recorded

OK, so I got the hero wrong, but still, pretty close. And the only time I’ve left a game before the final out was when my son was ill. For the record, a few people did leave after the home half of the seventh inning, but it was maybe 5% of the crowd. And the folks that left? Mostly folks who were not real fans but just happened to have tickets for whatever reason. (As an aside, the new Yankee Stadium has been redesigned to be significantly smaller – in terms of seating capacity – than the old Yankee Stadium. So the new Yankee Stadium will be full of non-fans who are there to impress business colleagues or the like. It’s possible that the Yankee fans will realize this and riot next year when they figure out that the affordable upper-deck seats have been replaced with luxury boxes. The New Yankee stadium is an affront to the true baseball fan. I’m proud to say that Fenway Park is still populated primarily with Red Sox fans.)

As we were walking to the park, I mentioned to John that part of the Citgo sign burned earlier in the day. John: “Is that a good omen or a bad omen?” Erik: “A good omen. As in somebody’s going to light a fire under the Sox tonight!”

Did you know that a whole chunk of the right field seats are reserved for the media? These are in the same area as the Family Bargain game tickets, a program that was quietly eliminated after the 2003 season.

The first six innings. Uncool. Sox down 7-0. After the first three innings, I told John that we were going to break the game into thirds. The Rays won the first third. The second third was a draw (0-0). And then there was the third third.

And in the case of the Rays, it doesn’t matter if you’re within seven outs of a trip to the World Series with a seven-run lead.

Plus I was wearing my Yaz shirt (number 8) to the game, and “8” proved to be the lucky number for the Sox last night.

Before the game, news spread that the Rays had eight cases (eight!) of champagne chilling in their clubhouse. Practically, a team has to be prepared on a night that it can clinch, but still, the news provided motivation for the Sox. When you’re down 3-1, as the Sox have been in the past, the pressure is off. The pressure is on the other team to seal the deal.

As John said, when you overcome a 7-0 deficit to win 8-7, there are lots of heroes. And lots of moments that stand out. Here are some that stood out for me.

In the bottom of the seventh, Fenway Park got to its feet when Dustin Pedroia stepped to the plate. The entire park would remain standing for the rest of the game. I’ve never seen anything like this. With two outs, Pedroia singled to right, scoring Jed Lowrie and sending Coco Crisp to third.

Then came Big Papi (David Ortiz) who hit a no-doubter home run to right to bring the Sox within striking distance.

And then, another turning point. John and I both commented that with two outs and nobody on, the Rays outfielders were all playing very shallow for Mark Kotsay. Like eight-steps-in shallow. They have apparently been playing him like this all series. And what does Kotsay do? Doubles over B.J. Upton’s head (and off his glove) in center field. Positioning on that play was huge, and that’s not something the TBS broadcasters are smart enough to notice. It was a huge play.

Then came Coco Crisp’s at-bat, which was as epic as they come. Fenway Park was expecting the epic at this point. I have always believed in the improbable. I went to a game against he Rangers this year where the Sox won 10-0 by scoring nine runs in the second inning. Anything can happen. I videoed most of that at-bat (see below) because I knew something great was going to happen. Of course, it did, Crisp singled to drive in Kotsay. Game tied 7-7.

And by now you’ve probably seen the 9th inning. with two outs, Youkilis hustled to get an infield single and forced the Rays third baseman Evan Longoria to rush his throw, which ended up bounding into the stands, sending Youk to second base as the potential wining run.

The only question was who was going to get the walkoff hit.

The Rays walked the (on this night cold) righty Jason Bay to get to the (on this night hot) lefty J.D. Drew to set up the “desired” lefty-lefty match-up. And Drew hit a liner over the head of right fielder Gabe Gross for a walkoff ground-rule double. Actually, I’m not sure if that got scored a double or a single, but whatever. The Sox won a thriller.

It seems that the Sox just don’t win Game Fives, then win Game Fives in dramatic fashion (for Sox fans), which translates to crushing defeats for Sox opponents.

I won’t say that I slept well last night. I didn’t get to bed until 3:00 am, and I didn’t sleep very much because I (still) have too much adrenaline flowing through my body. I did, however, go to bed wearing my #8 Yaz shirt – and “8” was the lucky number for the Sox in Game 5! Four games, 27 outs, 3 strikes. I love baseball!

P.S. Dear Dad, thanks for taking me to Red Sox games when I was a kid. Dear Mom, thanks for writing to Yaz to get his autograph for me.

The Green Monster before the game: 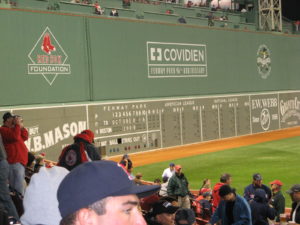 The media section in right field: 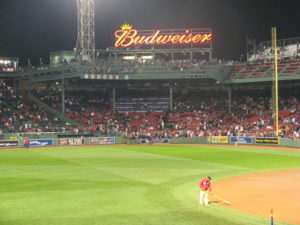 Dice-K comes out of the game, Okajima comes in: 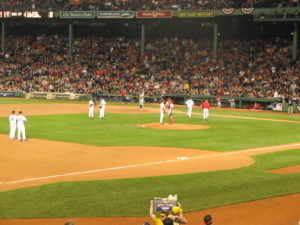 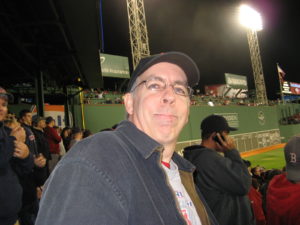 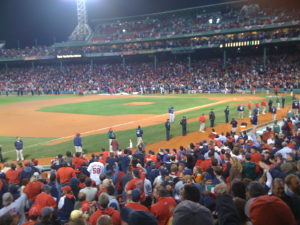 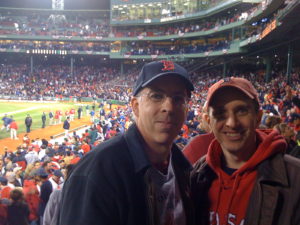 [This video is copyright 2008 Erik J. Heels (see erikjheels.com) and is NOT subject to DMCA takedown by MLB. So there.] The Boston Red Sox defeated the Tampa Bay Rays in the 2008 ALCS Game 5 at Fenway Park 8-7. Here’s my home video of Jonathan Papelbon entering the game in the 7th inning, which was one of many turning points in the game, and which changed the mood of the Fenway fans.

[This video is copyright 2008 Erik J. Heels (see erikjheels.com) and is NOT subject to DMCA takedown by MLB. So there.] The Boston Red Sox defeated the Tampa Bay Rays in the 2008 ALCS Game 5 at Fenway Park 8-7. Here’s my home video of the celebration after a three-run home run by Big Papi (David Ortiz) in the 7th, which was one of many turning points in the game.

[This video is copyright 2008 Erik J. Heels (see erikjheels.com) and is NOT subject to DMCA takedown by MLB. So there.] The Boston Red Sox defeated the Tampa Bay Rays in the 2008 ALCS Game 5 at Fenway Park 8-7. Here’s my home video of most of Coco Crisp’s epic at-bat in the 8th inning, which ended with Coco singling in the tying run, and which was one of many turning points in the game.