Is your favorite social network budding, fresh, ripe, or rotten?

Check Your Assumptions At The Door

In the 1990s, writing business books was easy. So was picking stocks. Remember day trading? It’s easy to pick stocks (or write business books) in a bull market. But nothing lasts forever, including bull markets, as history teaches us.

So when I sat down to analyze which social networks I should pay attention to and which I should ignore, I did so with the context of history as my guide. In the spring of 2012, the excellent article and infographic The Rise And Fall Of Online Empires: Will Facebook Survive? did the very same thing, comparing the rise (and sometimes fall) of six online companies: AOL, Yahoo!, AltaVista, MySpace, Digg, and Facebook. (And, yes, Facebook will survive.)

An embedded infographic from the 2012 article appears below. If the image fails to appear, then click the words “online empires infographic.” (Because the web-based Internet has only been around for 20 years and it’s not like anyone has had time to work on data standards or anything.)

I used those six companies as a starting point and added other top social networks to the list.

In the spirit of checking my assumptions at the door, here are mine. I assume that:

Without further ado, here are the top 15 social networking companies, as ranked by Google Trends, from most to least popular.

From the results, you can clearly see the interest in various social networks rise and fall over time. 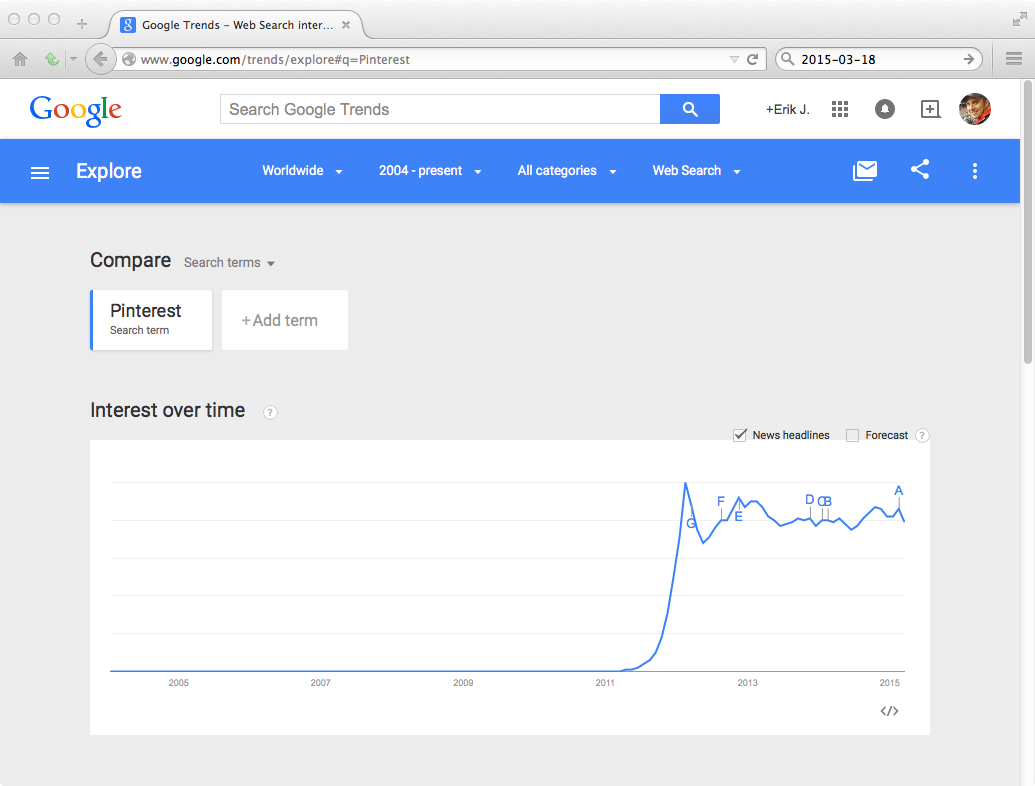 Other top social networks Instagram and Vine could arguably be added to this list, but I had to draw the line somewhere. 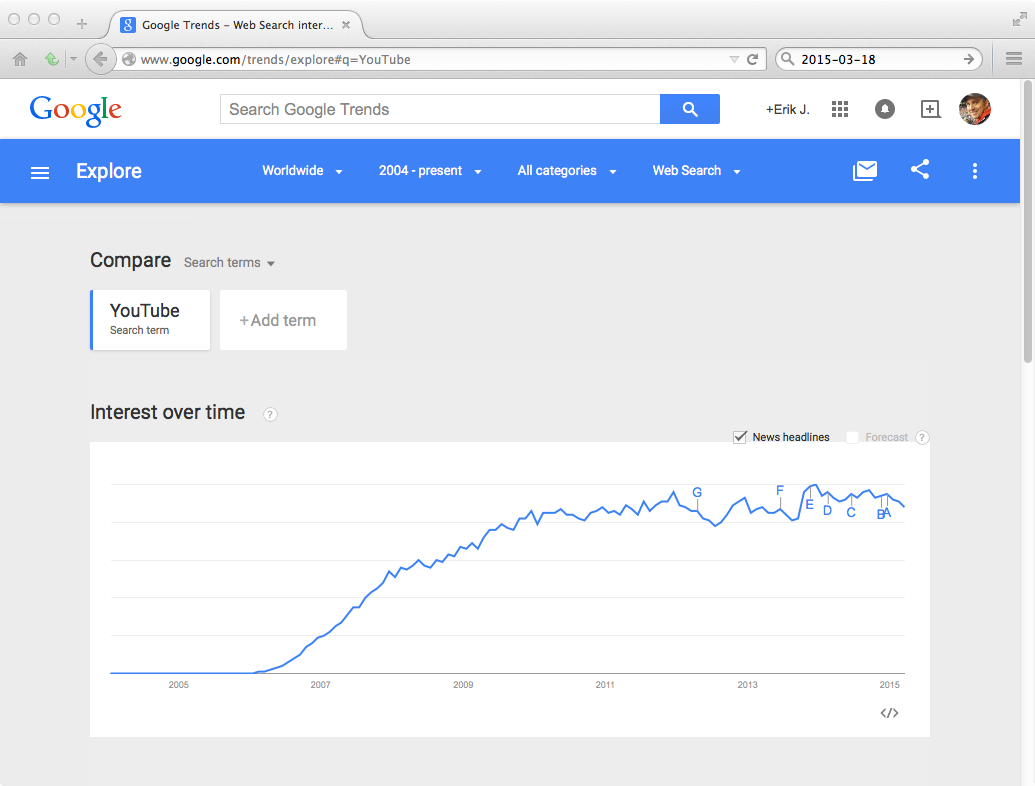 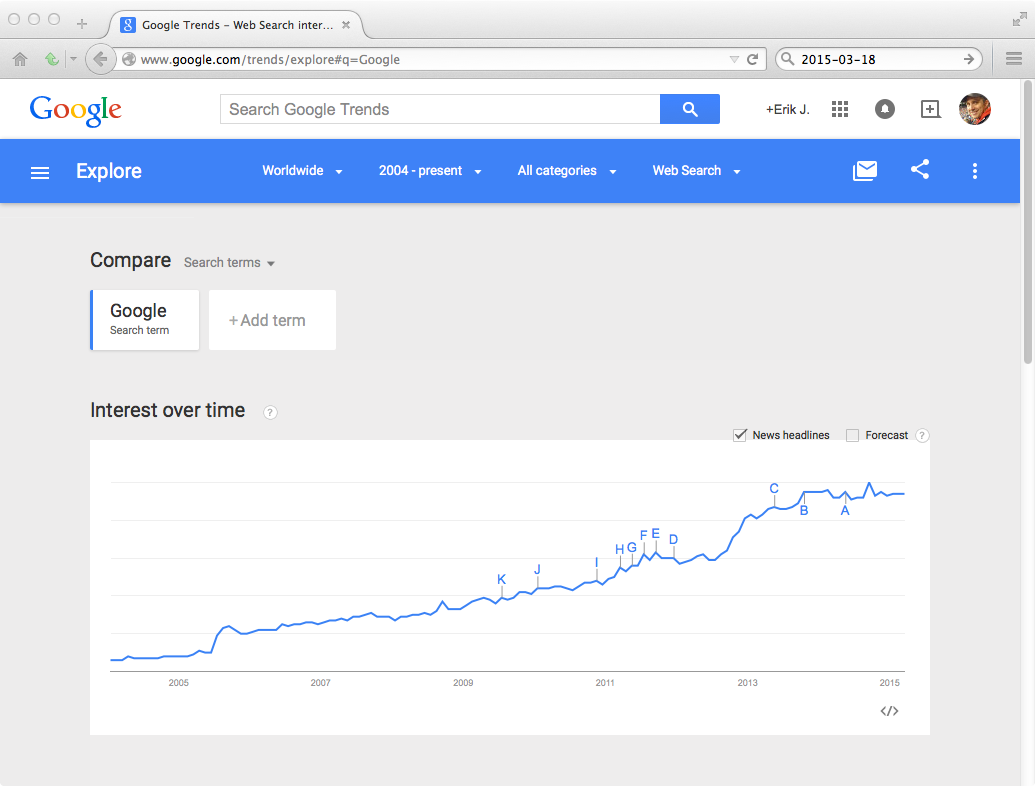 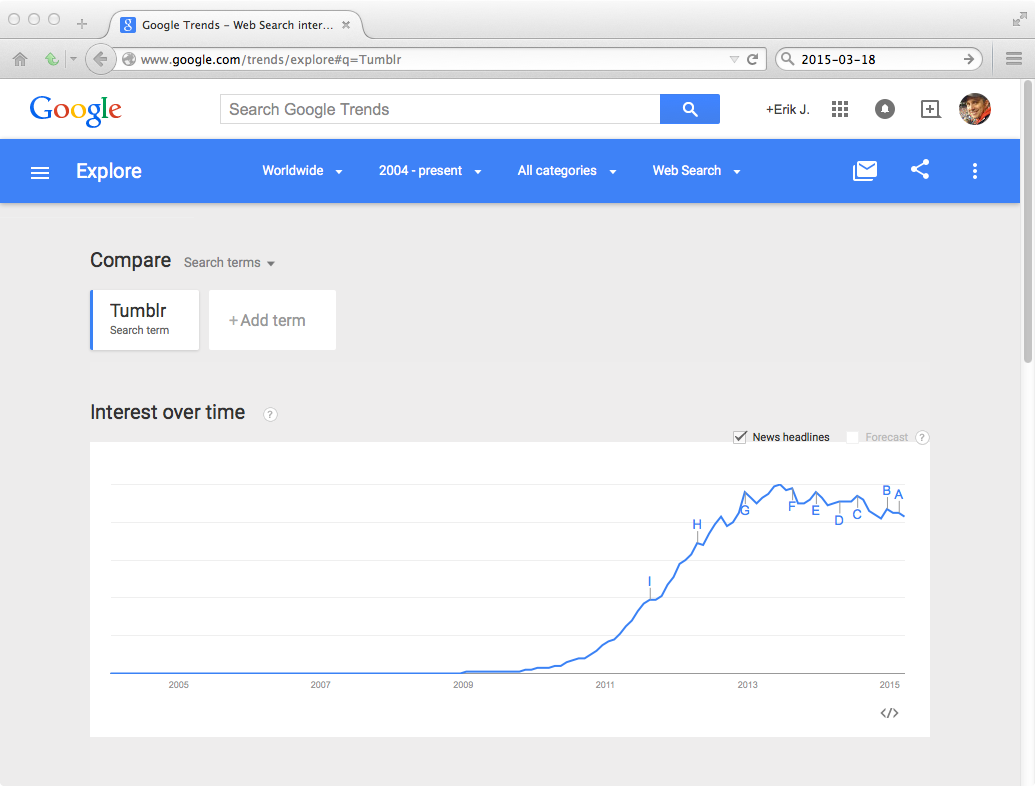 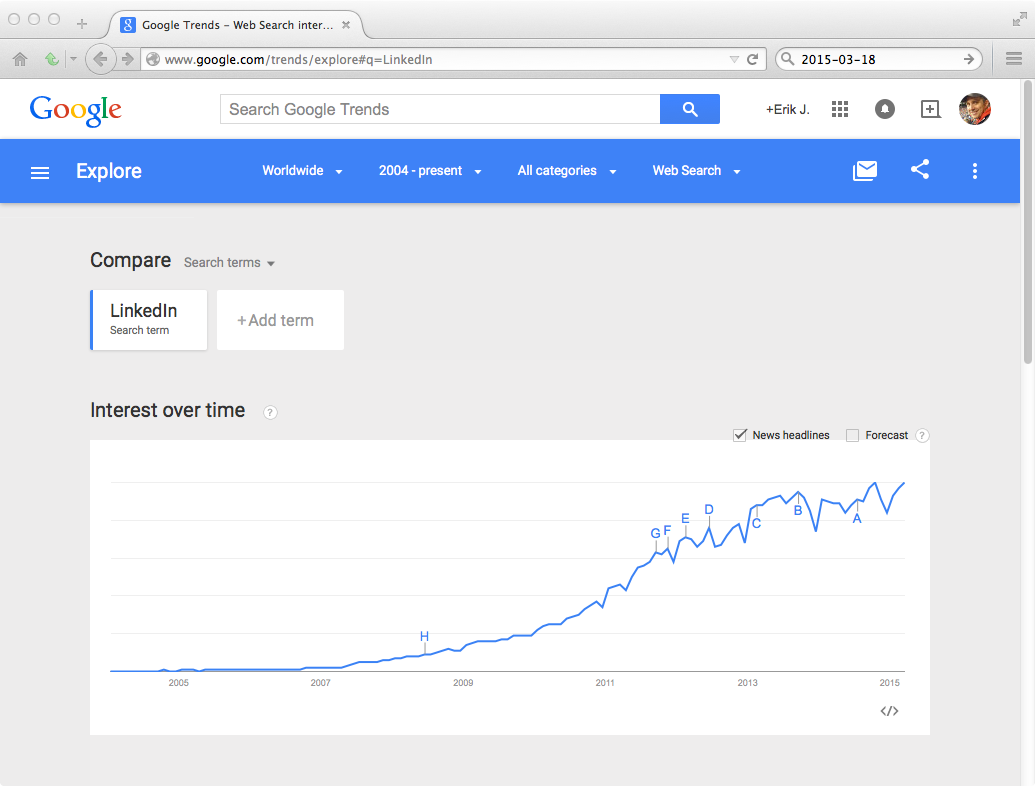 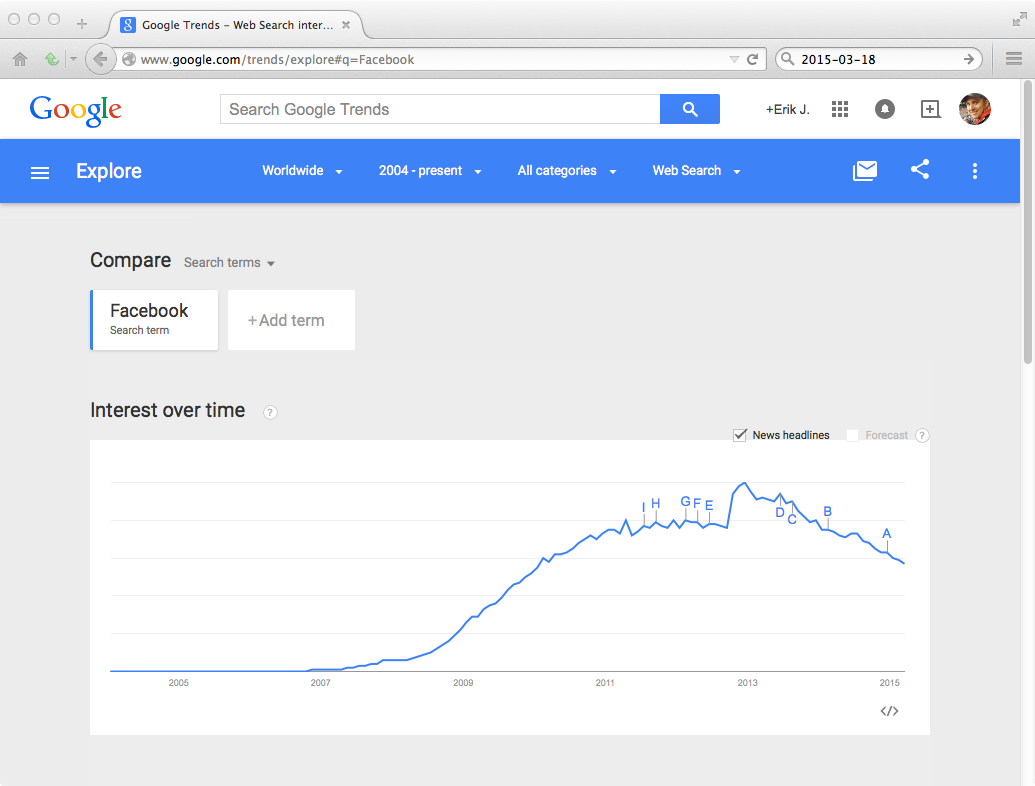 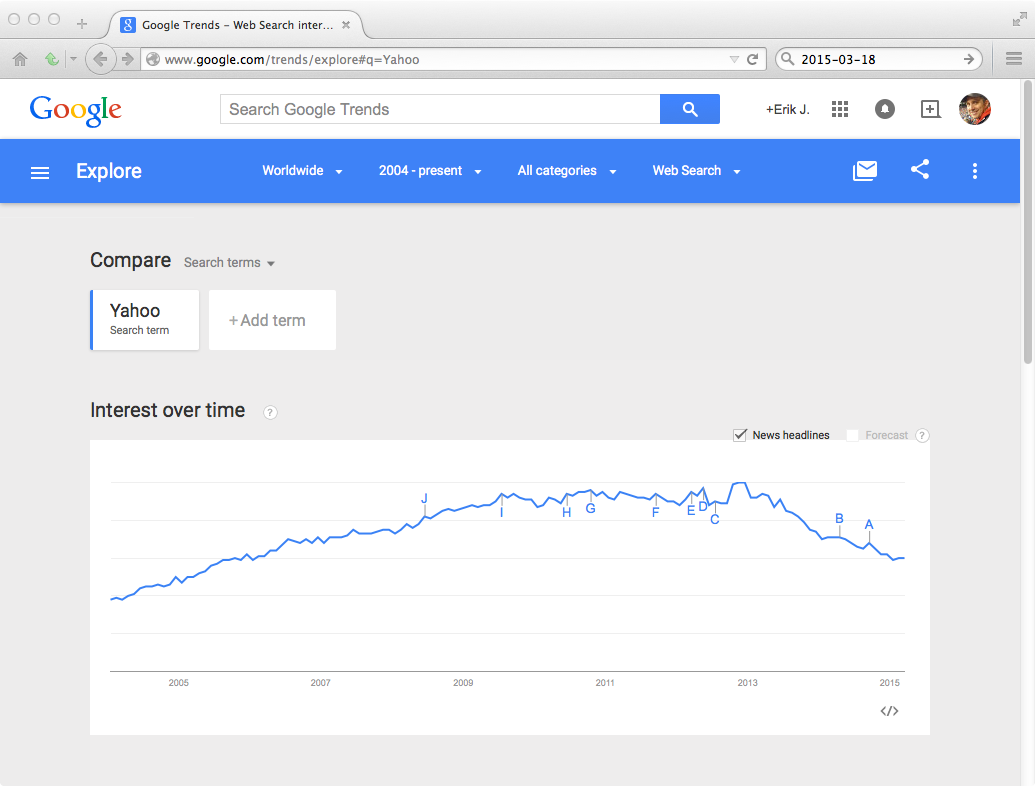 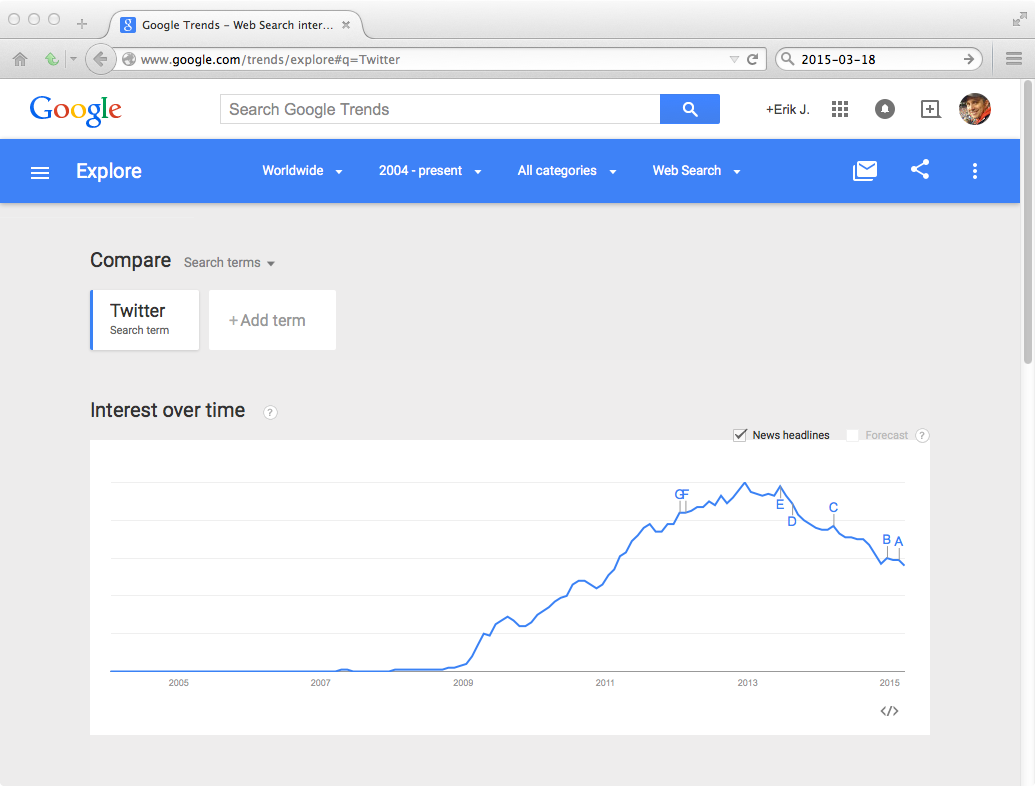 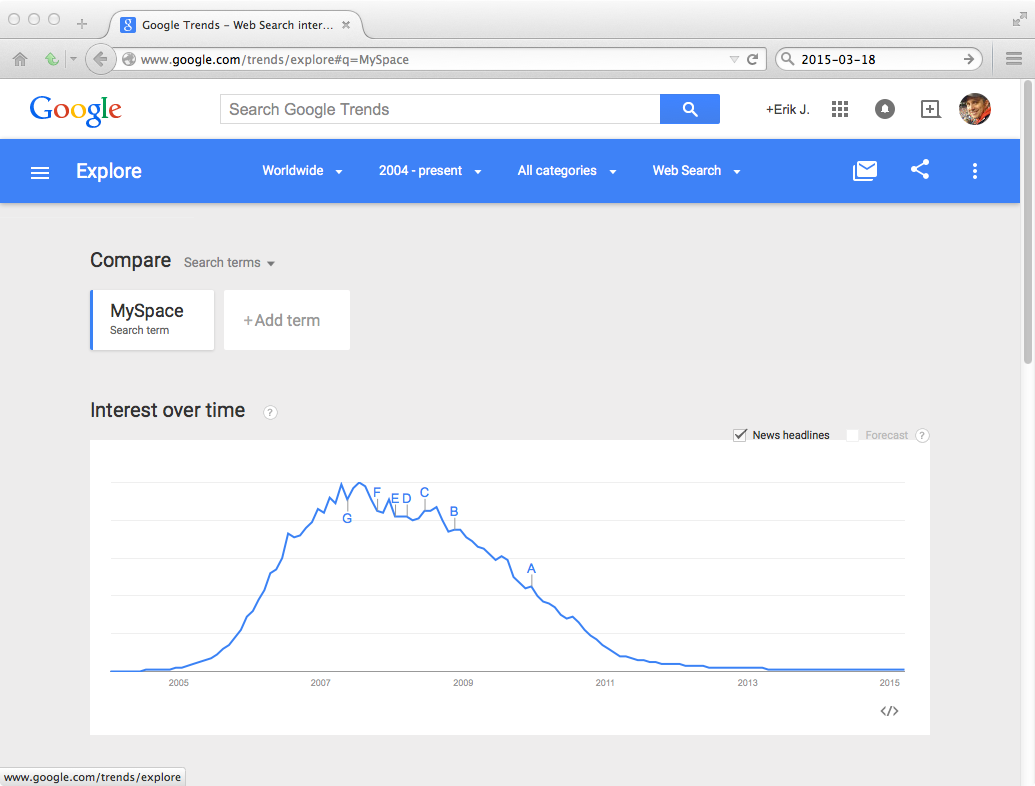 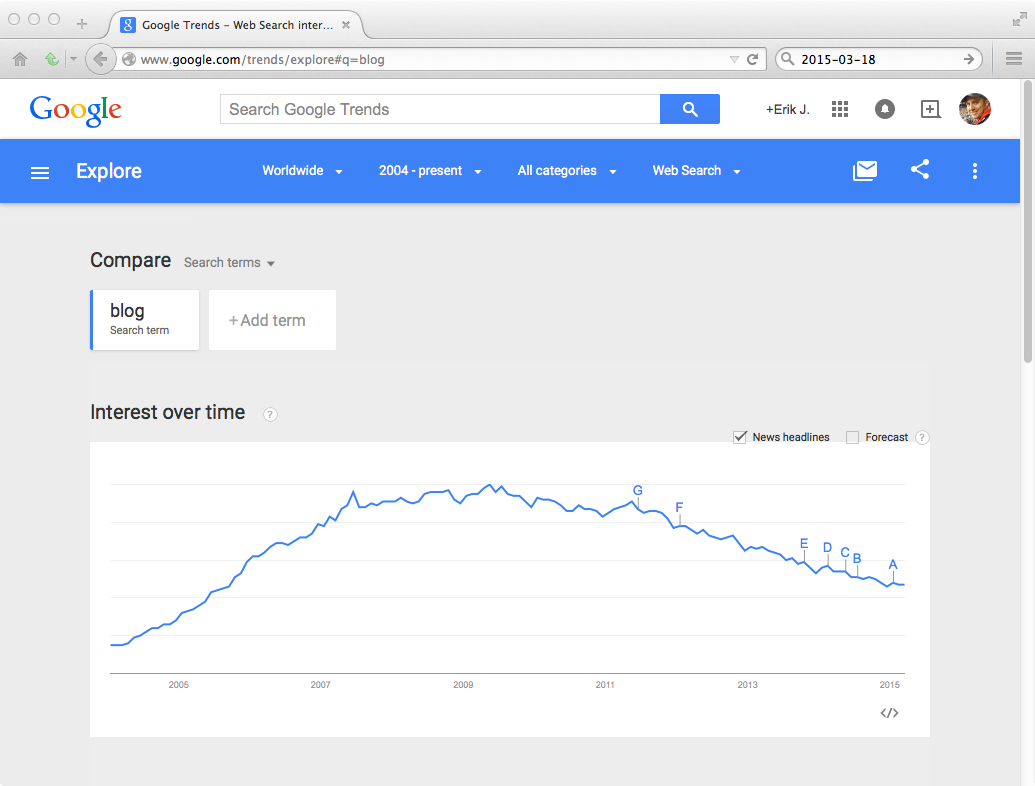 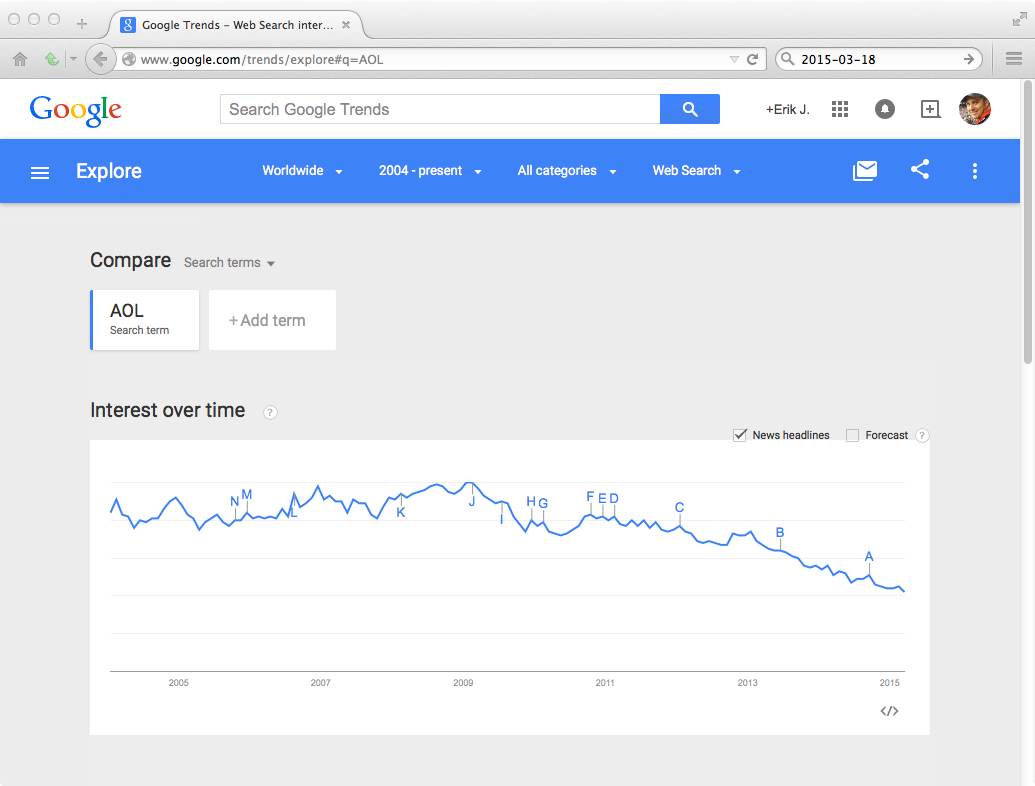 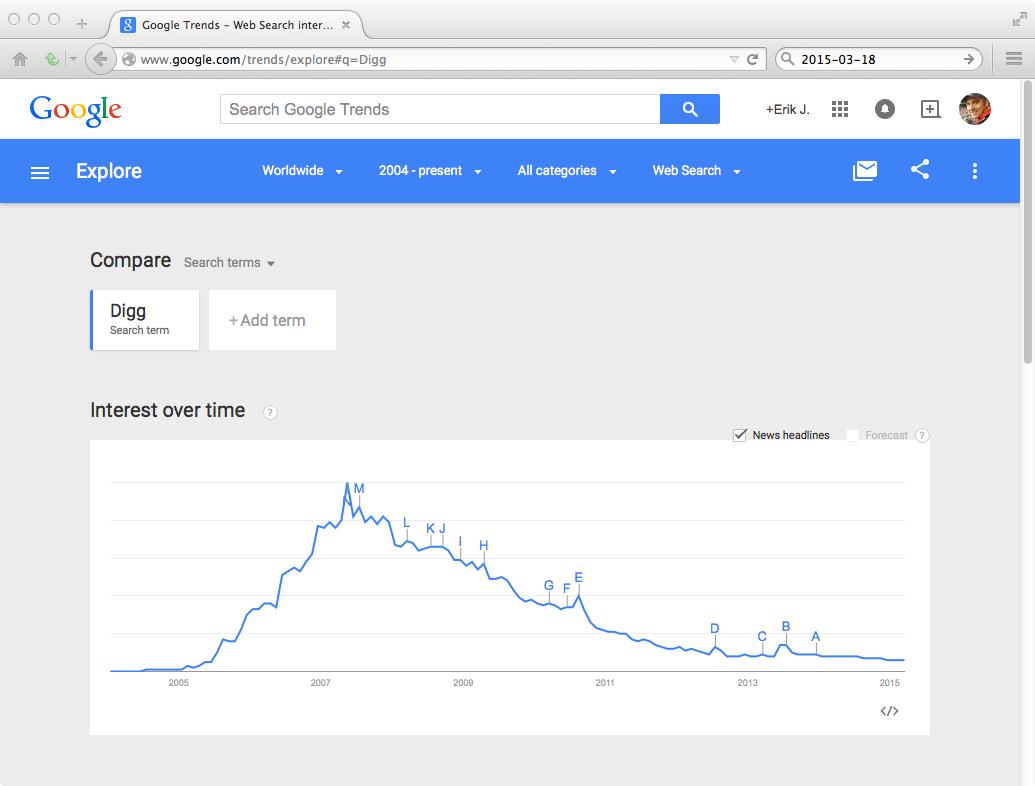 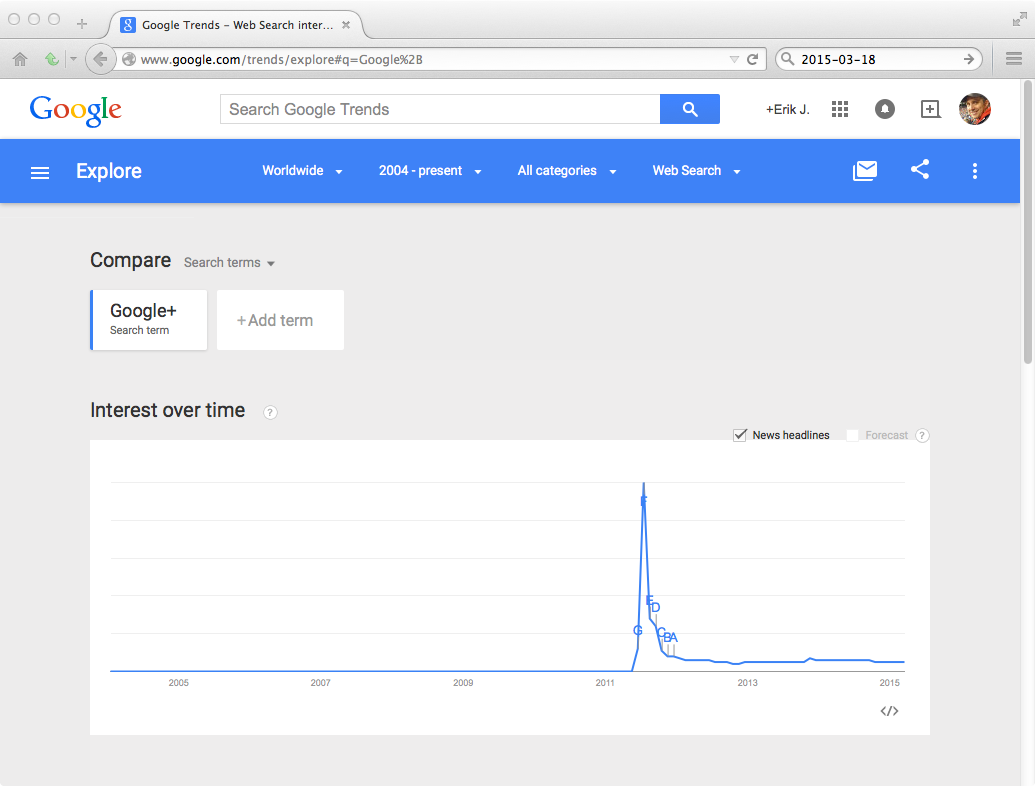 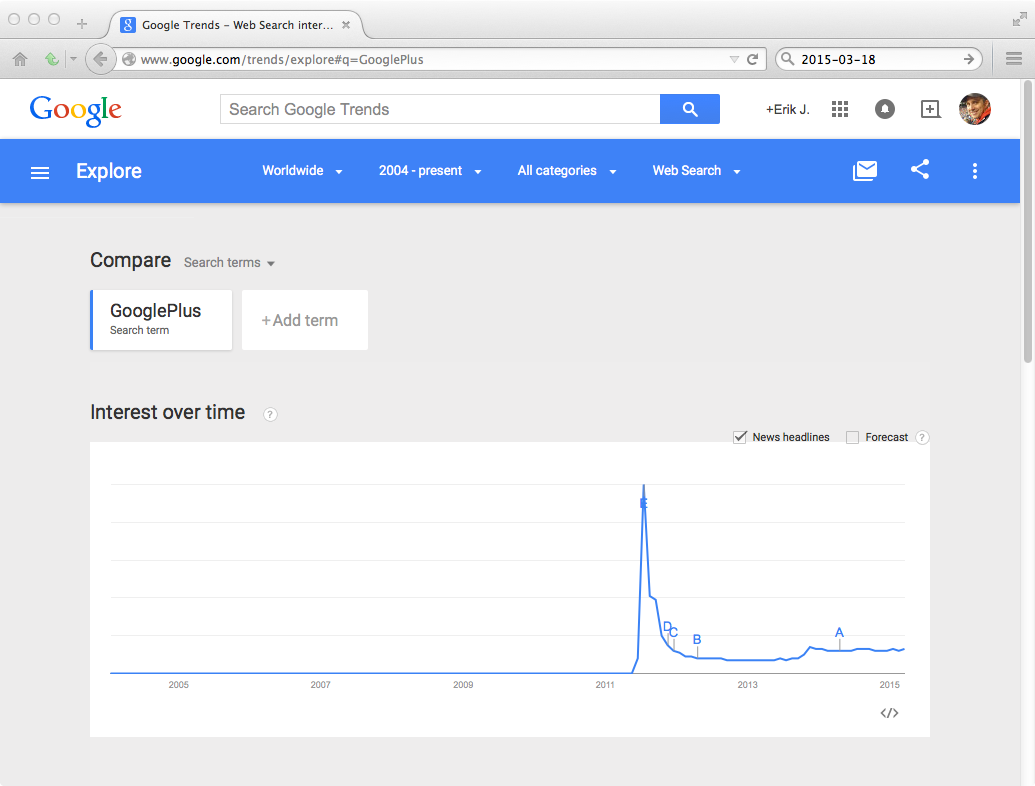 Since Google Trends only allows you to compare five terms at a time, I had to run multiple searches in order to arrive at the above individual rankings. But when you compare the top five online empires on the same graph, Facebook clearly dominates. The same is true of other groupings. Just as #1 Facebook dominates #2 YouTube and #3 Google, #4 Yahoo dominates #5 MySpace and #6 Twitter, and #7 blog(ging) dominates #8 AOL and #9 Tumblr.

I ran searches in groups of 3 of the top 15 online empires: 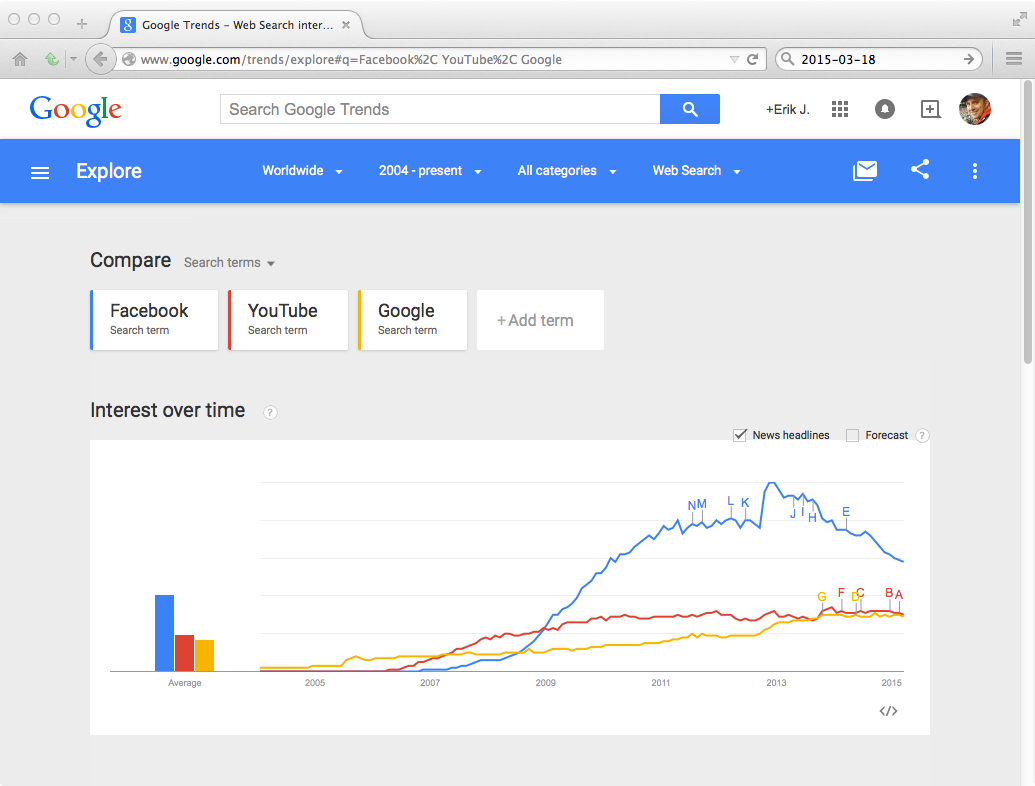 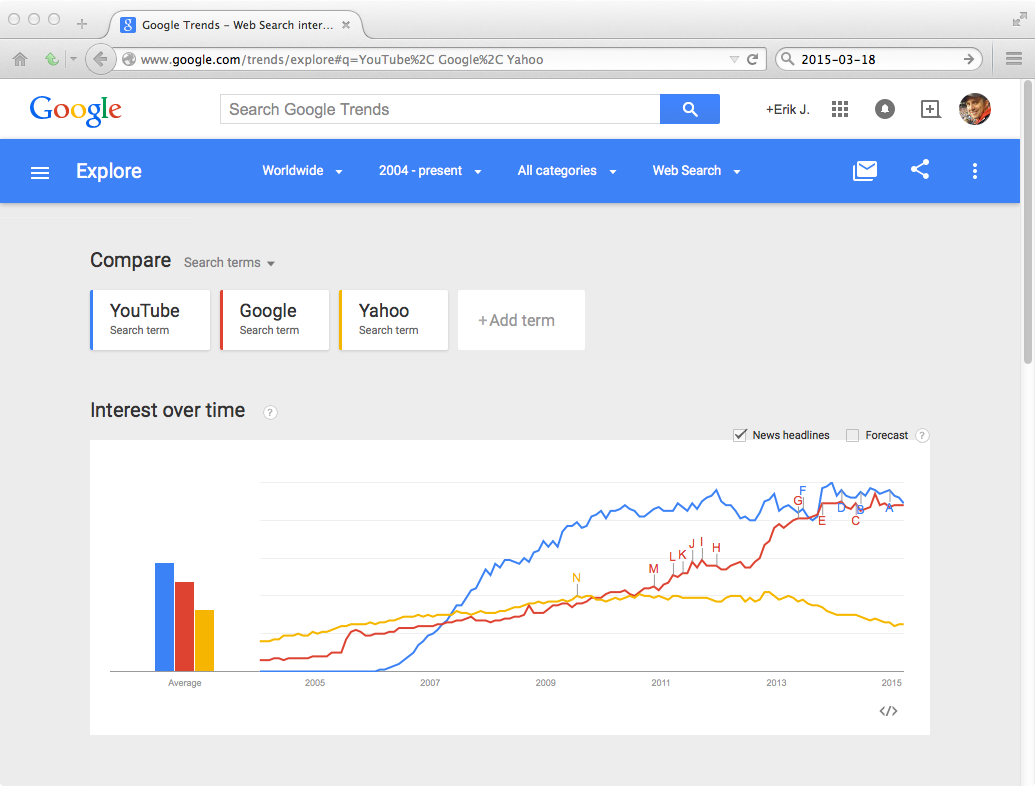 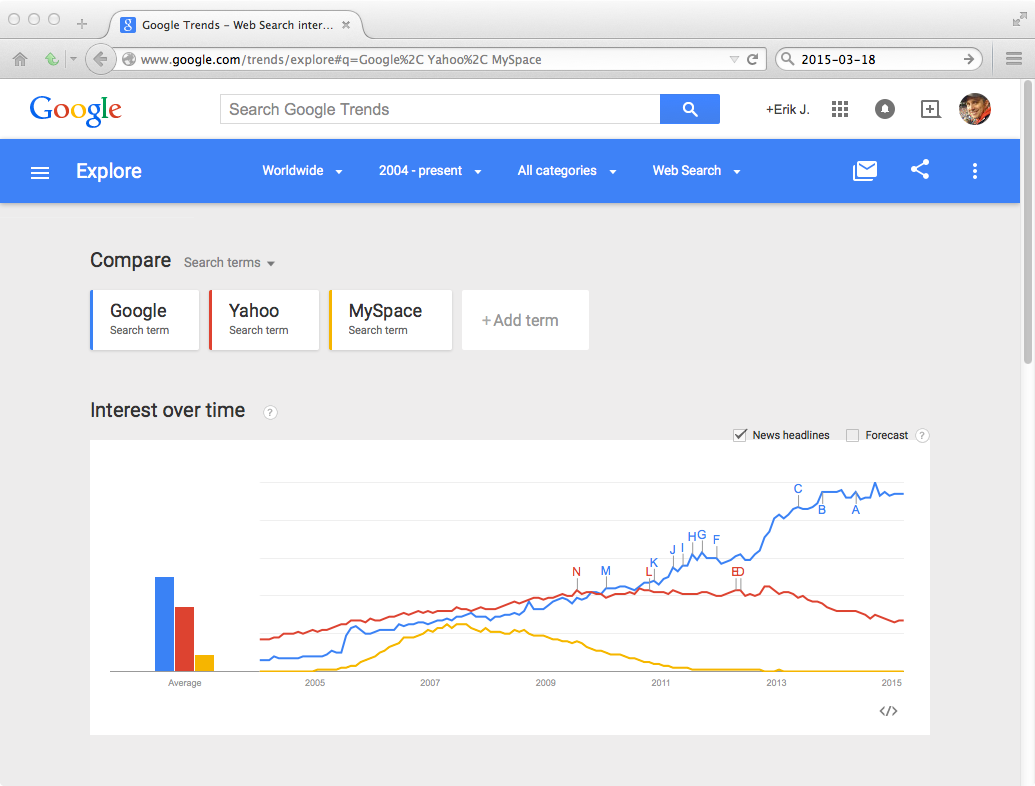 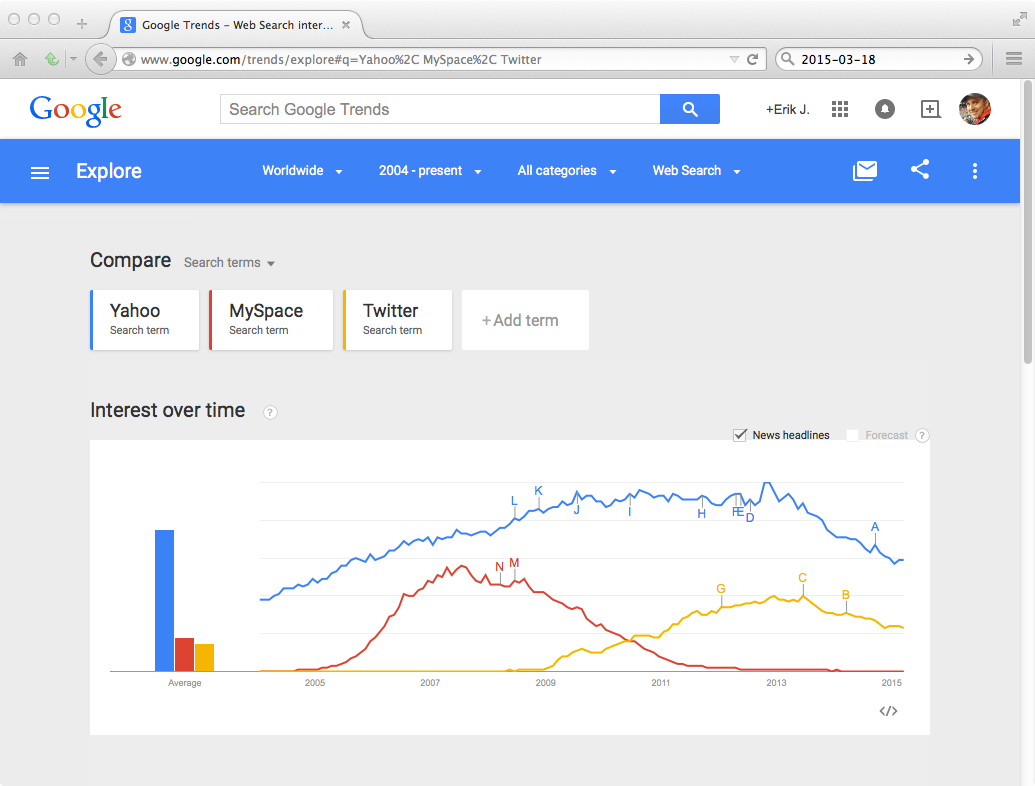 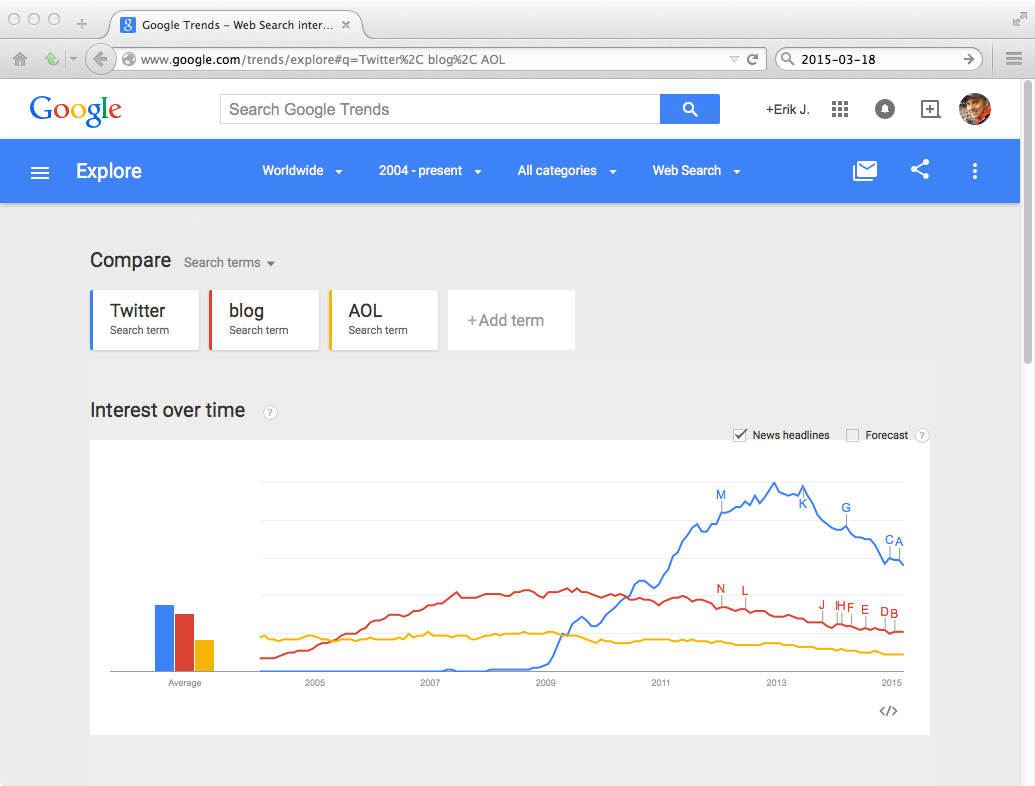 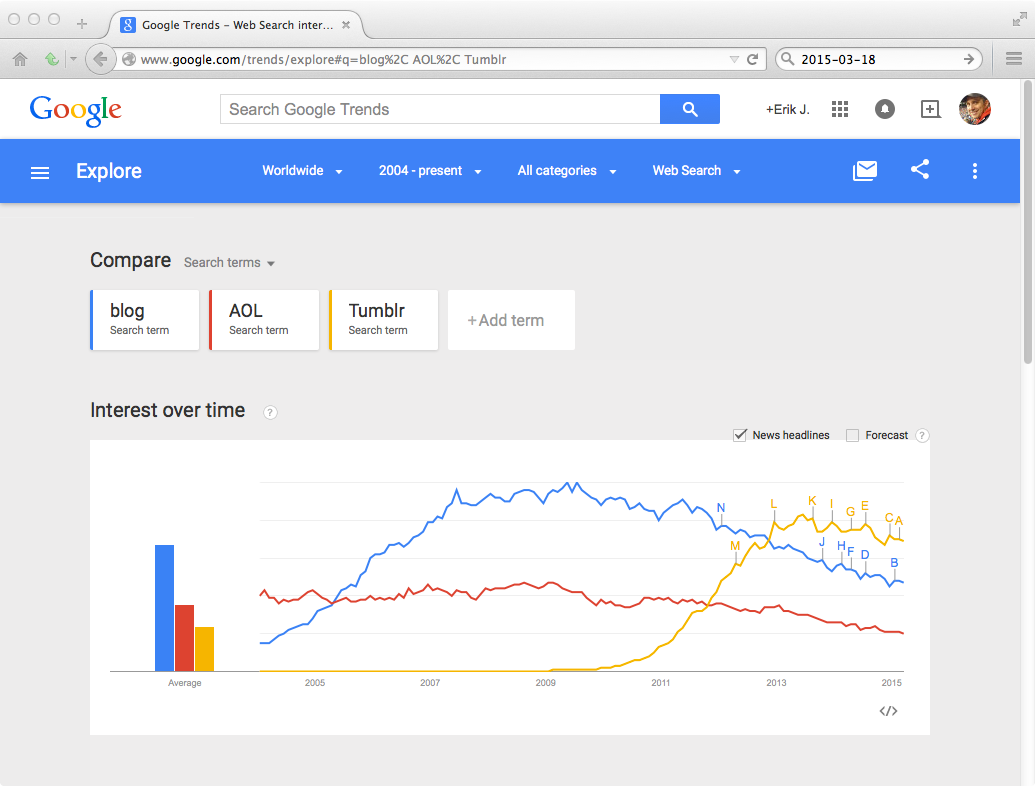 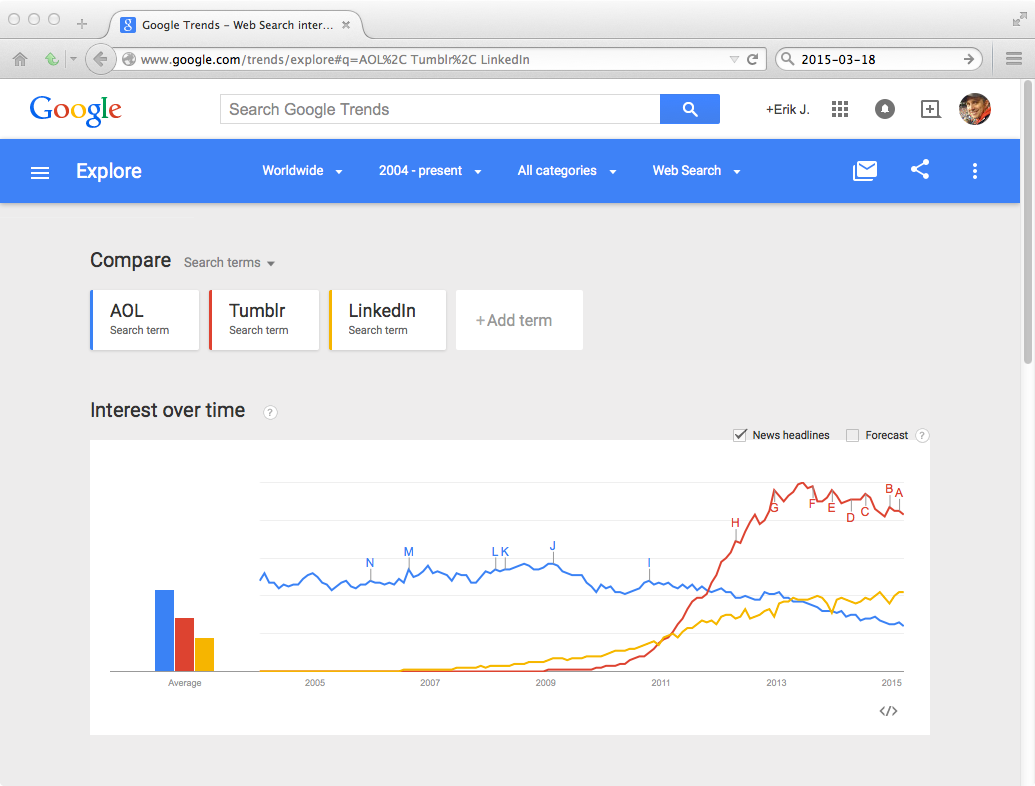 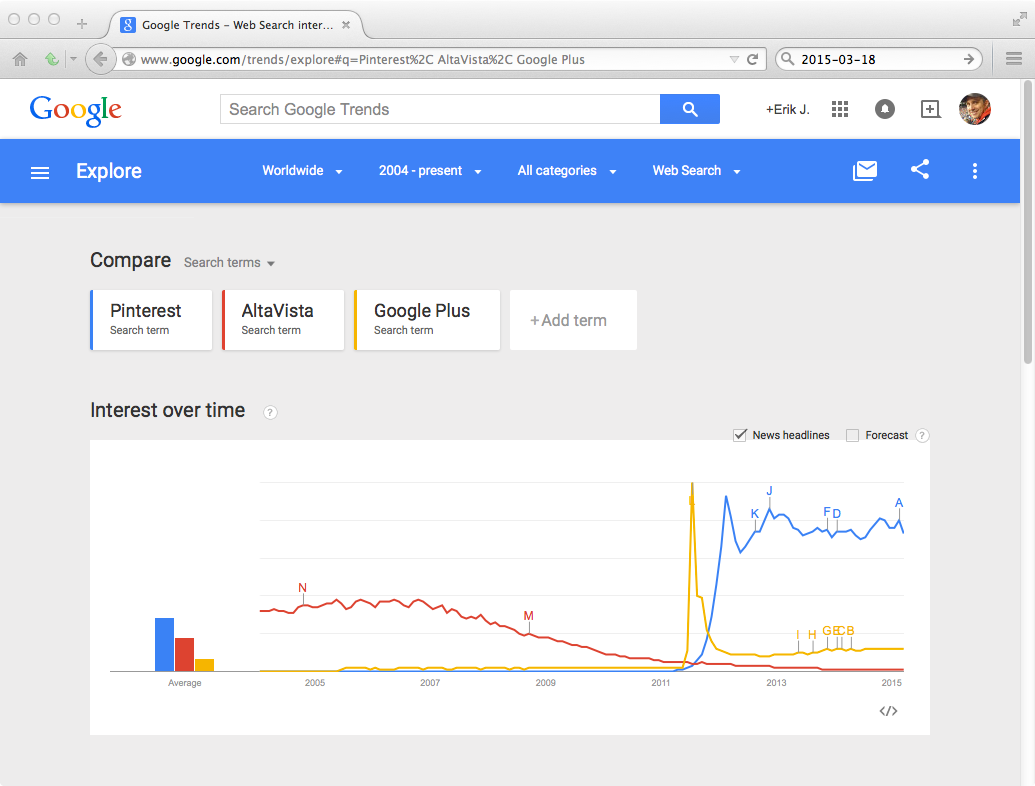 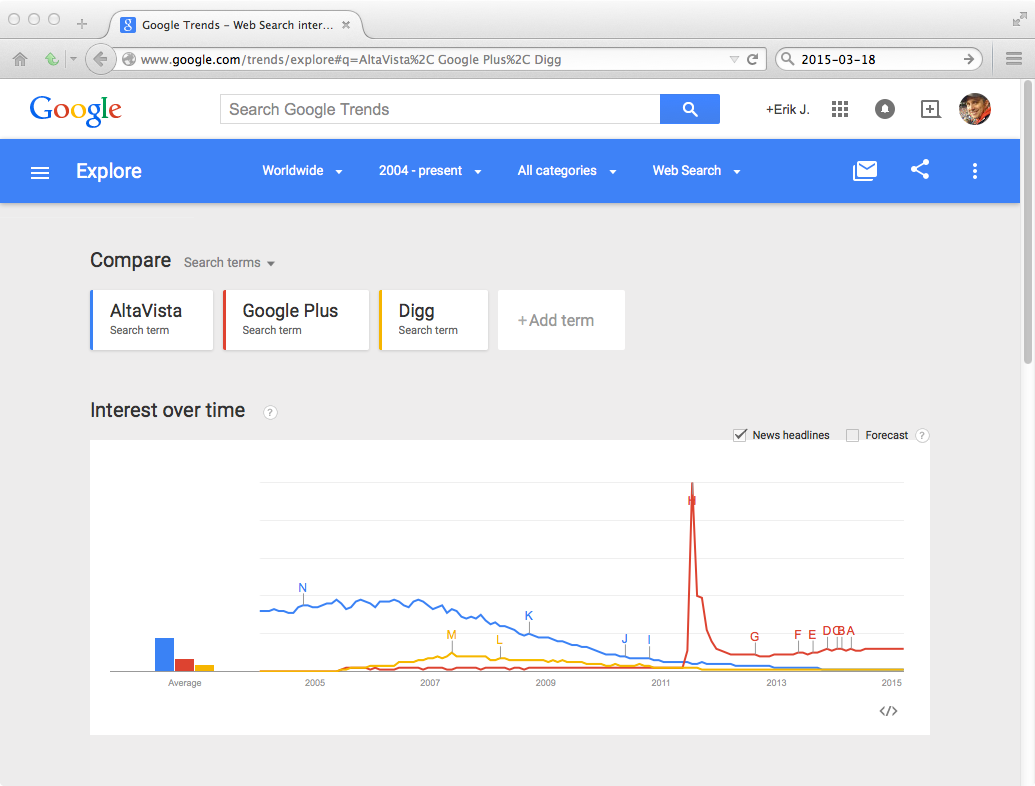 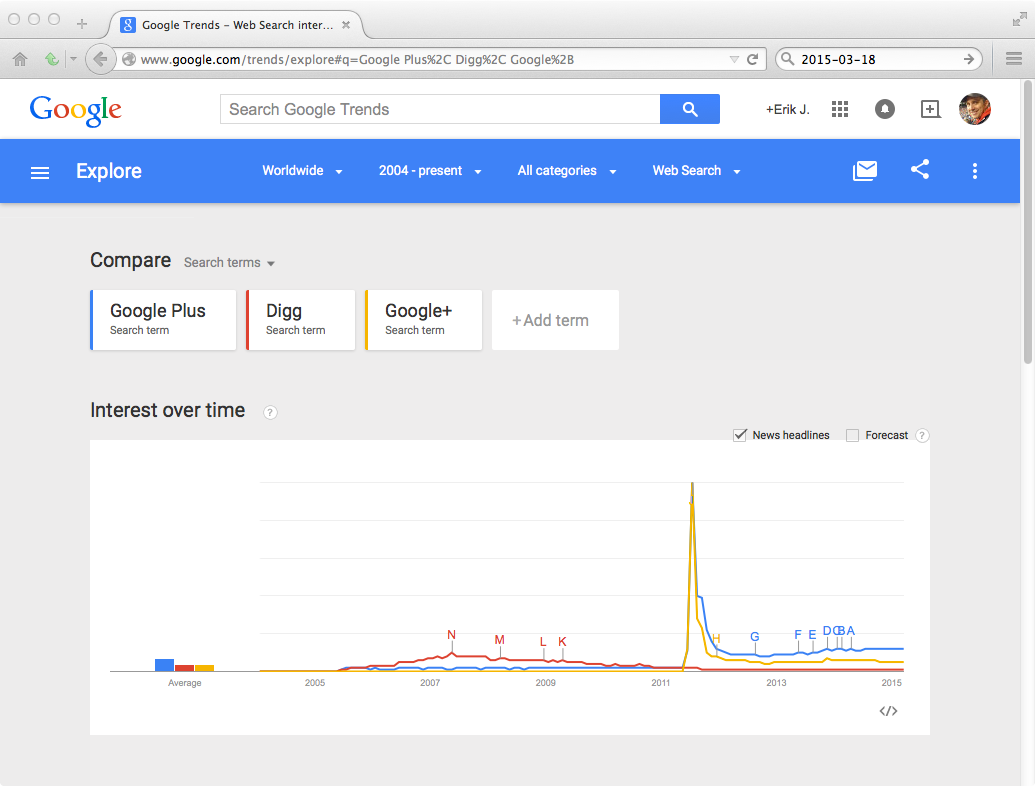 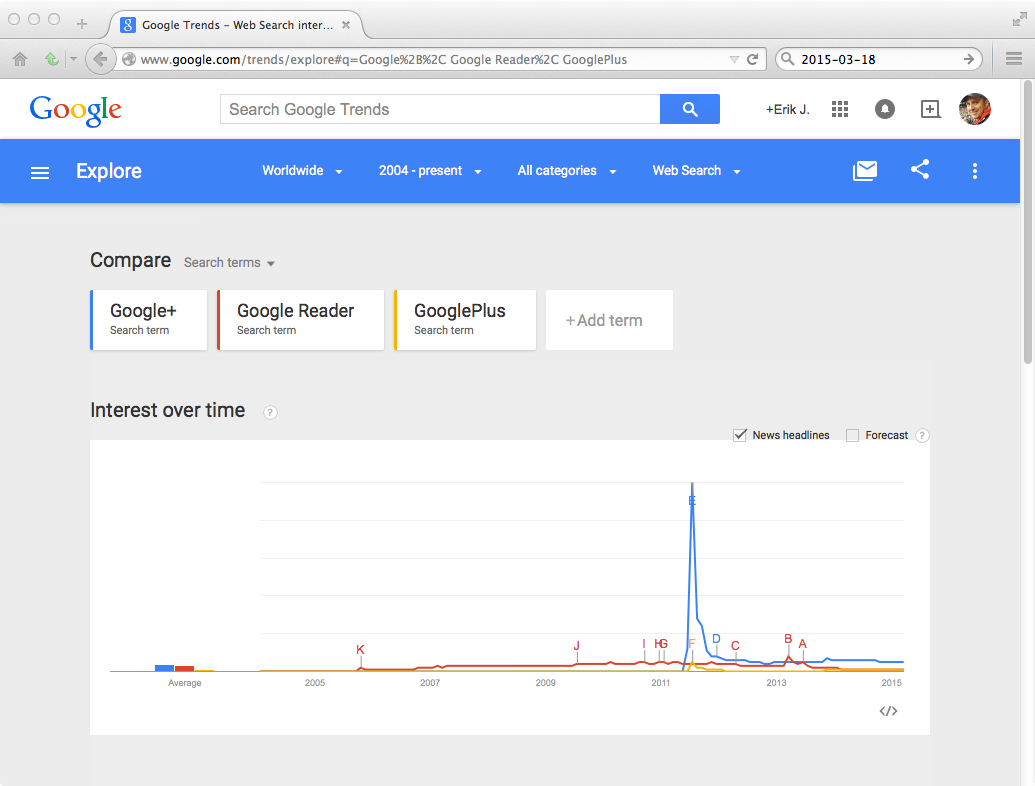 Why Do I Care About This Stuff?

As for my business, patents and trademarks are trending down:

But public companies and the Fortune 1000 are also trending down: 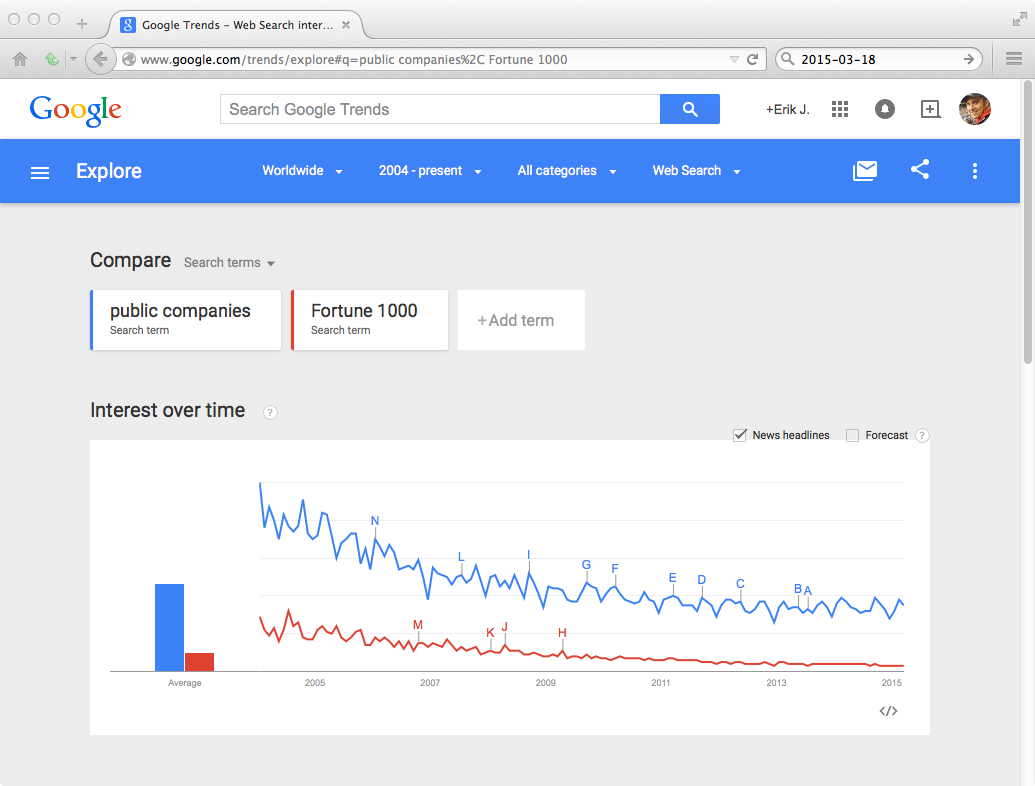 Fortunately, startups are trending up: 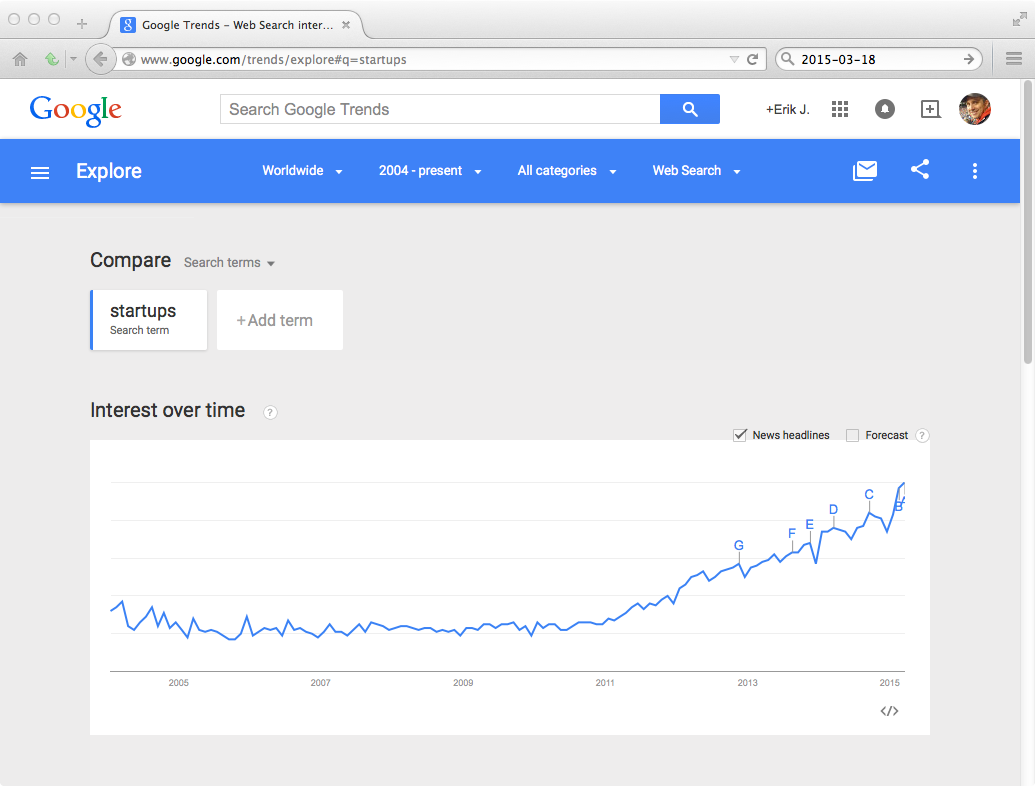 So Clocktower should be OK for the next 17 years or so.

Similarly, even if Facebook is in decline, it is so huge that it should dominate social networking for the next 17 years or so.

The worst business book from the 1990s, IMHO, is “The Innovator’s Dilemma” (1997). In that book, the author manages to turn an obvious and simple proposition (namely, that companies must compete with themselves before their competitors do) into a book by massaging data to fit the author’s pre-determined conclusion. In doing so, the author falls into one of the same traps for the unwary that entrepreneurs stumble (or, more correctly, eagerly leap) into: namely, believing your own press releases. Just like day traders in the 1990s had delusions of grandeur, entrepreneurs ridding a wave (or living in a bubble – pick your analogy) fall prey to fooling themselves.

My friend Peter, a serial entrepreneur, tells the story of advising an early-stage startup in the early 2000s (whatever that decade is called). While trying to raise a B round, the founders told Peter of their product success, (dubious) EBITDA positive, and projections for the future. When they finished their pitch, Peter asked them one question: “How many hours are employees working, on average, per week?” The founder enthusiastically answers, “Oh 70-80 hours per week easy! We live our work, we work when we’re home!” Peter calmly replied, “Well, the reality is that you have no business. Working 70+ hours/week is neither scaleable nor sustainable. Furthermore, correctly adjusted for a 40-hour work week, you are losing money, have no likelihood of ever turning a profit, and are trending down. Good luck.”

So the lesson for social networks of the 2010s (whatever this decade is called) is simple: don’t believe your own press releases. If you want to build to flip, then build to flip, but be prepared to see your hard work wither on the vine when you do. Otherwise, build to last, but know that few companies (much less social networks) end up being living companies.

As for the social networks listed above, except for behemoth Facebook and tortoise-like LinkedIn, it’s been nice to know you.